Last week I have been speaking at the deGut Berlin – one of Berlin’s largest founder conferences – about the chances the digital transformation bears for SMEs. The audience to this talk has been pretty heterogeneous ranging from business students to experienced founders.

Lately, the importance of the digital transformation has been discussed widely. The changes the Internet, new technologies, digital services, IoT, and big data bring have received increasing media coverage. Even policy makers have been debating how to actively support those transformation processes.

This may be due to the fact that besides the chances the digital transformation offers, it also imposes challenges to established firms like SMEs. In fact, if they miss their chances, their core products might vanish from the landscape completely as has happened for Kodak. Kodak did not expect the market of digital photography to take over as quickly as it did in the 1990s. As a consequence the well renowned producer of analogous cameras and films had to cut both its camera and film production. Similarly, Nokia – once the leading distributor for mobile phones – missed to bring out a smartphone that could compete with Android phones or the Iphone. Having faced a constant decline in revenues, Nokia’s mobile phone unit got sold to Microsoft in 2014.

But the digital transformation also promises for economic advantages like employment. In 2012, one million people had found employment in the digital industry, that is, more people than in the automotive industry. Numbers increasing. What is more, in 2015, Google counted 2.9 billion Internet users worldwide – 40 percent of our entire population, who initiated 1.2 trillion Google searches in 146 different languages. Those numbers bear great potential for uncountable business opportunities.

Meanwhile, they also raise a variety of challenges to be kept in mind by CEOs of SMEs. According to a study by Deloitte, 10 percent of the German SMEs are not aware of the need for digital transformation yet. But at the same time, the external challenges grow – with or without being noticed. Customer needs change. With ever more Internet-enabled devices in households, e-commerce has become part of our daily lives. Hence, customers require digital, instant, and flexible customer services. Suppliers rely increasingly more on digitally managed logistics, and markets change through digitalisation.

Put differently, the digital transformation opens niches for new players in the market who exploit the opportunities of quick foundations, prototyping, and testing the Internet provides. At the same time, digital services promise for an internal increase of efficiency of 40 percent for SMEs. Processes such as HR – recruiting, on-boarding and employee integration – can be accelerated by digital HR services. Those lead to cost potentials that can be further exploited by changing hierarchies, e.g., through communication tools that allow for quicker answers across the organisation and, thus, more flexible, even entrepreneurial employee action.

Taken together, the future of digital transformation has already started and led to an increase in exports of more than 25 percent or, put differently, 87.5 Billion additional export revenues for German SMEs in 2012. In fact, revenue forecast promise a two-digit increase for the German economy for 2016.

Still, SMEs have to dare take their chances. A successful example for such a transformation and business model innovation is CEWE. The German-based SME was one of the leading firms in photo printing and an important competitor to Kodak. During the 1970s, CEWE did not only prosper constantly, they also invested strategically in production sites all over Europe. Yet, in the 1990s first sales of digital cameras started. Although those cameras were still quite expensive at that time, professional as well as hobby photographers quickly adopted the digital technology. As a consequence, printing photos got less popular and CEWE faced a dramatic decline in revenues. In 1995, they commissioned a special R & D task force to explore the opportunities of digital photography that might be out there for CEWE. Having taken their job seriously that R & D unit got soon back to the CEO with an idea: They had developed a terminal to print out digital pictures instantly. The terminal should to be set up with selected distribution partners. Additionally, they had come up with a website prototype that should help customers to create their personalized photo albums online.
Since 2000 CEWE has now successfully undergone their digital transformation by partnering with firms like DM – a German drugstore chain, which set up their instant printers and from whom customers can pick up their albums. This way, CEWE ensures local customer proximity at the same time as a digital one by offering customers the option to digitally develop their albums.
Taken together, CEWE, a German SME, has successfully managed the digital transformation. They transformed their entire organisation to be capable to market their product innovation within just a few years.

What can be taken from this is, firstly: Analyse your potential. Not every opportunity is the right one for your firm! Secondly, dare the Internet. It won’t wait for you. Thirdly, create your firm specific know how. Use the expertise out there to your advantage! Fourthly and finally, explore and exploit your chances. Now!
Because in the end, we only regret the chances we did not take! 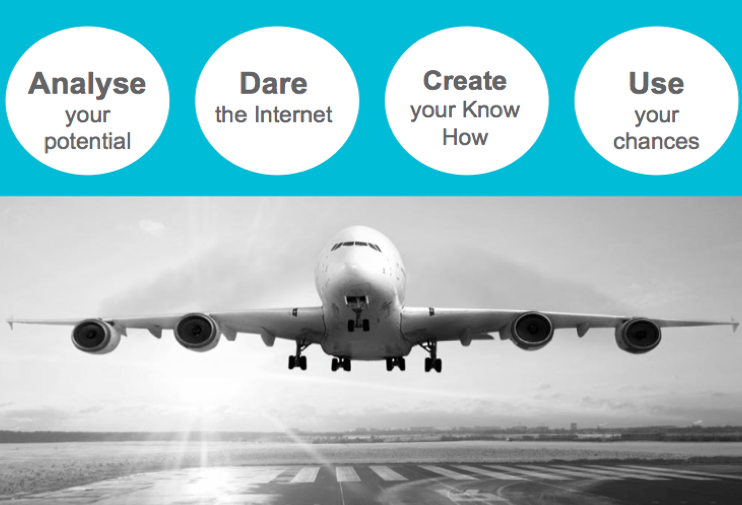