This case study explores The Enquete Commission on Internet and digital Society (EIDG), which is a parliamentary inquiry body of the German Bundestag that conducted its work from May 2010 until April 2013. Enquete Commissions are special bodies of the German Bundestag, which form an interface between policy-makers and academic and professional experts to examine through discussion forums and working groups broad and complex matters of society that cannot be sufficiently dealt with within the regular parliamentary framework. The EIDG was introduced in response to rising awareness regarding the challenges for politics and society that digitization brings along, which became apparent in a controversial draft bill before the parliament that called for the mandatory blocking of websites with child pornography-related content. The EIDG consisted of 34 individuals, 17 democratically elected members (members of parliament) and 17 experts and practitioners representing industry, trade unions, civil society and academia. Furthermore, the public was invited to participate in the EIDG’s consultations “to a special degree,” which included efforts at transparency and an online engagement platform. It is too early to assess the policy impact of the EIDG’s work, as it is still unclear to what extent the new parliament will include the EIDG’s policy recommendations in its legislative initiatives. However, as a mechanism for bringing together heterogeneous sources of knowledge and expertise for the purpose of enlightening decision-making processes, the general model of an Enquete Commission can be regarded as an effective and legitimate mechanism for parliaments and possibly other deliberative bodies. Going forward, finding the appropriate implementation mechanisms that will help inform evidence-based policy making and provide justification for spending further resources should be taken into account in the process design.

This study has been published within the paper Multistakeholder as Governance Groups: Observations from Case Studies by Urs Gasser, Ryan Budish, and Sarah Myers West, that synthesises a set of twelve case studies of real-world governance structures. Together with the underlying case studies, it is the result of a globally coordinated, independent academic research pilot project by the Global Network of Interdisciplinary Internet and Society Research Centers (NoC). Facilitated by the Berkman Center for Internet & Society at Harvard University, this study examines existing multistakeholder governance groups with the goal of informing the evolution of—and current debate around—the future evolution of the Internet governance ecosystem in light of the NETmundial Principles and Roadmap, discussions at the Internet Governance Forum, and the NETmundial Initiative, as well as other forums, panels, and committees.

The study Enquete-Kommission Internet und digitale Gesellschaft (Enquete Commission on Internet and Digital Society) can be found as Appendix E on pp. 109 – 129 of the full publication. 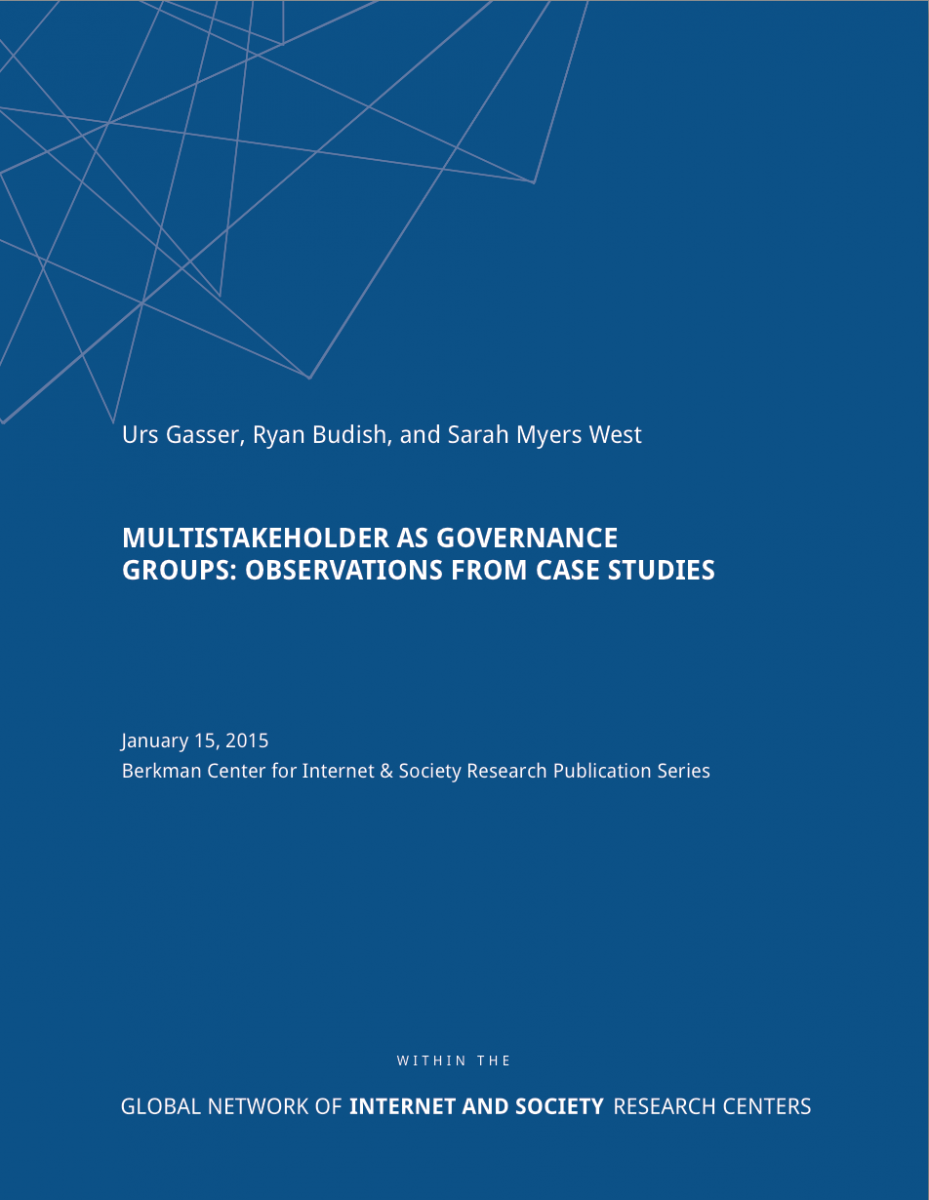