Will 3D printing Lead Us into a New Era of Production and Consumption? A peek behind the curtain of the hype

The hype surrounding 3D printing and its potentials reminds many of previous technology hypes, as there seems to be a recurring pattern. Just a few years ago, electric vehicles and augmented reality technologies were said to mark a new era, including extraordinary exaggerations of the realistic potentials (Mehler-Bicher et al., 2011). My personal favorite of overhyping a technology is nuclear energy in the 50s — anticipating nuclear fission powered cars and planes. 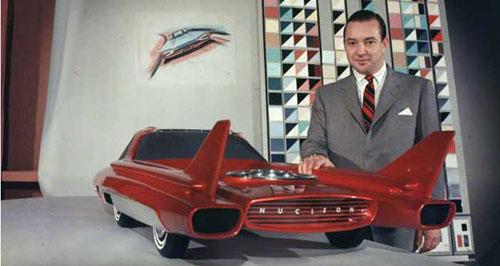 Generally and almost naturally, however, many expectations aren’t met as quickly or as effectively as initially thought — or have to be discarded altogether. The reasons are manifold, but appear to be strongly influenced by (a) unanticipated interdependencies with other technologies that require further research and development, (b) the imagination necessary to identify relevant applications for the new technology, and (c) the adaptation of the technology to applications that are often high in idiosyncratic specificity. This article is about a model that helps us to understand and evaluate technology hypes better — the Gartner hype cycle (GHC).

The basic assumption behind the GHC is that every new technology’s hype follows a similar cycle that can be tracked through indicators such as overall visibility and adoption rates (Fenn & Time, 2007). Though this approach is most generic and it certainly is not reflecting reality perfectly, it is a valuable resource to quickly and comparably assess technologies. The cycle starts off with an innovation trigger that raises initial interest and expectations that leads into a phase of rapidly rising expectations up to a peak point of inflation, is followed by a turning point that lets expectations plummet into a “trough of disillusionment” (Gartner, 2014). The way out of this vale can be slow, but is marked by the accumulation of tested and thus more realistic expectations. At the end of the cycle, expectations towards the technology’s potentials are commonly lower and less comprehensive than those at the peak phase, but tend to be rather specific and informed. This point indicates a relative maturity and a productive application of the technology. It also often goes hand in hand with a commoditization, i.e. everyday products incorporate an innovation that might have been hyped as the bringer of a new era of mankind only a few years prior. 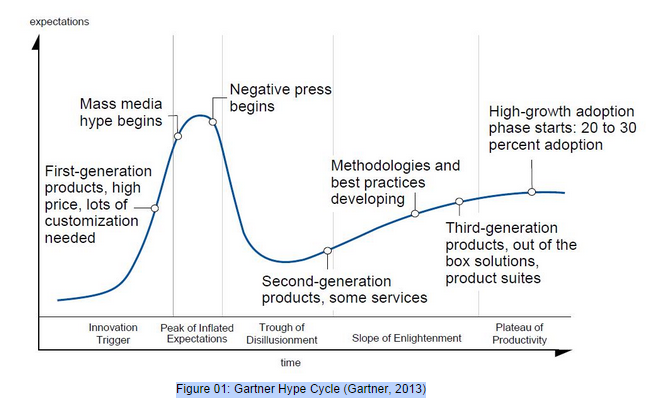 Last year, visibility and expectations concerning 3D printing were certainly soaring. Whether they have already reached their peak is difficult to assess as long as the technology is viewed from a meta level. If one divides the general term ‘3D printing’ into more specific subcategories, the fog of hype becomes lighter. The Gartner research institute took a closer look at various 3D printing technologies —e.g., fused deposition modeling and stereo lithography— and applications —e.g. prototyping and manufacturing— and placed them on the GHC curve. The found that only 3D printing used in prototyping processes arrived at a plateauing phase, while the rest is somewhere on the loopy hype cycle roller coaster.

Gartner’s assessment identified various 3D printing applications and technologies that are close to reaching or already arrived at their hypes’ peaks. Unsurprisingly, consumer 3D printing is believed to be at this point right now. As more and more consumer 3D printers become available, users can test their assumptions and expectations. The promise of independently and cheaply produced household items for example is met by items that might look nice and useful on the computer screen and in digital form, but not so much when printed. Quite similarly, 3D printing technologies utilized in the medical and manufacturing domain promised to revolutionize the way instruments and goods are made. What many seem to realize now is that it also takes professionals to handle the new technologies and processes. Training and educating i.a. designers, engineers, workers, and doctors takes time though and is one of the reasons why we might observe plummeting expectations for these domains in the short- to midterm.

Technologies that are already rebounding and make their way into mainstream markets include 3D printing and design software, enterprise applications, printing services, and 3D scanners. The latter underwent remarkable developments over the last years, as more and more niche applications were identified — ranging from archeological and landscape scans to body and dental scans. Learnings and advancements made in these specific segments are now combined to push 3D scanning into commodity products such as mobile phones and tablets (cf. e.g., Google’s project tango).

The technologies, applications, and topics that Gartner identified as the latest addition to their hype cycle scheme encompass legal, industrial, and educational realms. As more and more consumers buy and use 3D printers at home, copying and counter fitting somehow protected objects is likely to increase. This gives rise to intellectual property rights protection debates diverting, but also showing similarities with those concerned with software and maybe even century-old contentions surrounding the illegal replication of books.

Leading to the rising importance of libraries and schools as frontrunners in 3D education. These organizations have often been the first places to find consumer grade printers and will likely be pivotal in training professionals for the emergent industry applications. These include —potentially fundamental— changes of global supply chains and the use of 3D printers in manufacturing processes as printers increase built sizes, become more precise, and handle diverse materials.

Closely connected to these abilities is the emergence of bio-printing. First steps were made in laboratories towards printing skin and sophisticated objects such as organs and they look promising. While years away from general and commercial application, media outlets started discussing organ supermarkets and the possibilities of greatly prolonged life already1,2,3,4,5 — looks like a perfect next candidate for a full-blown hype I’d say.