The other side of innovation platforms

Innovation platforms such as jovoto or atizo are considered to be a source for harvesting innovative ideas among creative and dedicated users. The names for those user groups are manifold – innovation community, open innovation platform or simply idea competition. The list could be easily continued (see West  & Lakhani 2008). According to West & Lakhani, these communities has its own specifications. In the core, however, the opening of the innovation process is always to tap the users’ potential for creativity and knowledge. According to a recent empirical study (see Chesbrough & Brunswicker 2013), based on interviews with 125 managers of the largest companies in Europe and the US, the innovation process on open innovation platforms only plays a subordinate role. It appears that there is a certain divergence between the ascribed potential of those innovation platforms in scientific literature and their self-marketing and the reality.

An internet based innovation process is based on the same principles as a traditional one: idea generation, idea selection/ evaluation and also idea implementation. It’s up to the company which stage should be opened to the community. This approach can lead to unexpected problems…

Who selects the ideas?

When a company decides to give its community the freedom to rate and select the ideas, unexpected and often unwished-for outcomes are preprogrammed. The German dish soap brand Pril, had to intervene in an idea selection. In a design competition for a new dish soap bottle, the community’s will was perhaps not in total harmony with the companies expectations. Finally, the jury decided that a monster face or a bratwurst does not fit to Pril and chose another design. This approach justifiably led to trouble within the community. A similar thing happened to L’Oréal. The idea selection process was manipulated to avoid that a 71 years old retiree becomes the new face of a hair-cair product series. Surprisingly, Henkel signed L’Oréal’s retiree for another hair-care product series. Henkel apparently learned a lesson.

In both cases, the company had to intervene the process. Leaving the idea selection to the community, a company runs the risk that the choice is not in harmony with the corporate strategy. Admittedly, choosing a pre-defined product design is not exactly harvesting innovative ideas, yet the risk remains also in open innovation platforms that leave the selection power to the users.

A second challenge for companies can be embraced by the Arrow information paradox. Nobel price laureate Kenneth Arrow argues, that the value of an idea cannot be assessed unless it is revealed. Once an idea is revelaed the potential recipient has it and can decline to pay for it. Copyrights are able to reduce this effect but do often not adequately apply to ideas. Bernard Shaw’s wisdom ‘If you have an apple and I have an apple and we exchange these apples then you and I will still each have one apple. But if you have an idea and I have an idea and we exchange these ideas, then each of us will have two ideas.’ has its backside: Ideas are not exclusive. You cannot copyright a simple idea but rather their implementation into a technical solution. The mere plan of how to beam a person from A to B is great, but cannot be patented. The risk of piracy is a barrier for both sides: users and companies. For this reason, intermediaries like InnoCentive are helpful. A company with a special problem can give its task to InnoCentive and than serves as a “seeker”. Then, the problem get solved by the InnoCentive-members, the so called “solver”. Due to its high reputation, InnoCentive is considered to be trustworthy and is a link between idea seeker and solver.

The risk of failure

There is another rub in the idea: The risk of failure. Within traditional product development, a company covers the costs for a possible failure of the innovation, for instance when it maintains a R&D department. When a company transfers its idea generation process to a community, the company also transfers the transaction costs to the users. Only the winning idea receives a price – the other ideas are dropped or even worse exploited without financial reimbursement. The user who spends maybe weeks tweaking an idea instead of watching the Breaking Bad final is left with the bitter realization that his or hers effort and sacrifice was useless. This is the reason transaction costs for community members should be kept low by posing smaller subtasks or giving rewards for the second, third and fourth best ideas. It’s furthermore possible to offer toolkits to reduce transaction costs. Software applications with standardized functions are able to accelerate the innovation process (see von Hippel & Katz 2002). Companies that use innovation platforms and the innovation platforms themselves have to be aware that they are not buying in a cheap workforce without social benefits under the pretext of innovation. You have to give something back.

Retrieval of the idea’s honor

This blog entry points out the necessity to strategically plan and implement innovation competitions. Innovation platforms follow a simple logic: Instead of researching innovations within the companies’ walls, open innovation calls for the potential and creativity of the crowd. The implementation of such a strategy goes along with potential risks and challenges that need to be anticipated. On the one hand, the companies need to be aware of the decision power that they outsource. On the other hand, they need to design competitions that are equally benificial for the company as well as its external innovators. What I am trying to say is that the apparent small significance of open innovation platforms, as delineated at the beginning, might be rather a problem of poor planning and execution of innovation challenges. Let’s finish with a good example. Fiat successfully mobilised the crowd by shifting the design process of the urban concept car Mio towards the own community. 17.000 users contributed 11.000 concepts. Further exciting research insights to this project are offered at the Berlin Early Stage Researchers Colloquium of the Humboldt Institute of Internet and Society, on 21th Novembre 2013, in Berlin. In this context, Dora Kaufman, researcher at São Paulo University, will speak about the topic
“Collaborative Digital Platforms: a study of company-consumer networks in Brazil.” 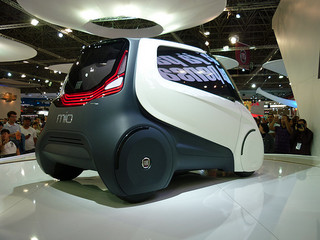 This post is part of a regular series of articles by doctoral candidates of the Alexander von Humboldt Institute for Internet and Society. It does not necessarily represent the view of the Institute itself. For more information about the topics of these articles and associated research projects, please contact presse@hiig.de.