Starting from the observation that the promises of participation are not self-fulfilling and that participation has to be actively realized, the workshop “Making Participation Effective” was held at the meeting on Chances and Risks of Social Participation and aimed at identifying a set of criteria for strategies that can make participation more effective.

The workshop was organised and moderated by Christian Pentzold, associate researcher at the Alexander von Humboldt Institute for Internet and Society in Berlin and lecturer at Technische Universität Chemnitz, by Dr Tobias Escher, researcher at Heinrich-Heine University Düsseldorf and Dr Steffen Albrecht, who is a researcher at Technical University Dresden. A hands-on perspective on online volunteerism and collaboration was provided by Nikolas Becker, who is board member of Wikimedia Germany and researcher.

Altogether around 20 participants with academic backgrounds predominantly in the social sciences and humanities attended and contributed to a lively discussion which was centered on the overarching question of how to make participation function and how to make it effective. Along this way, the workshop was structured by three questions that built upon each other.

I. What is participation? — Normative and empirical perspectives

The notion of participation covers many different means by which people become engaged in various enterprises and for a range of causes. The workshop mirrored this diversity of definitions and elements of what participation is or should be. Topics such as openness, legitimacy, distribution of power, and decision-making, among others, have been considered as crucial elements when we talk about the activity of taking part in society — or refusing to do so. Whereas in the beginning the most compelling elements workshop participants attributed to the term did not seem to have clear connections to one another, at the end of the first round five sub-categories could be extracted. While not exhaustive and partly overlapping, societal participation, whether offline or online, is often discussed within categories of participatory norms, aspects of content, the process of participatory activities, as well as power through or because of participation. It became obvious that empirical as well as normative criteria are being combined in our views of participation. 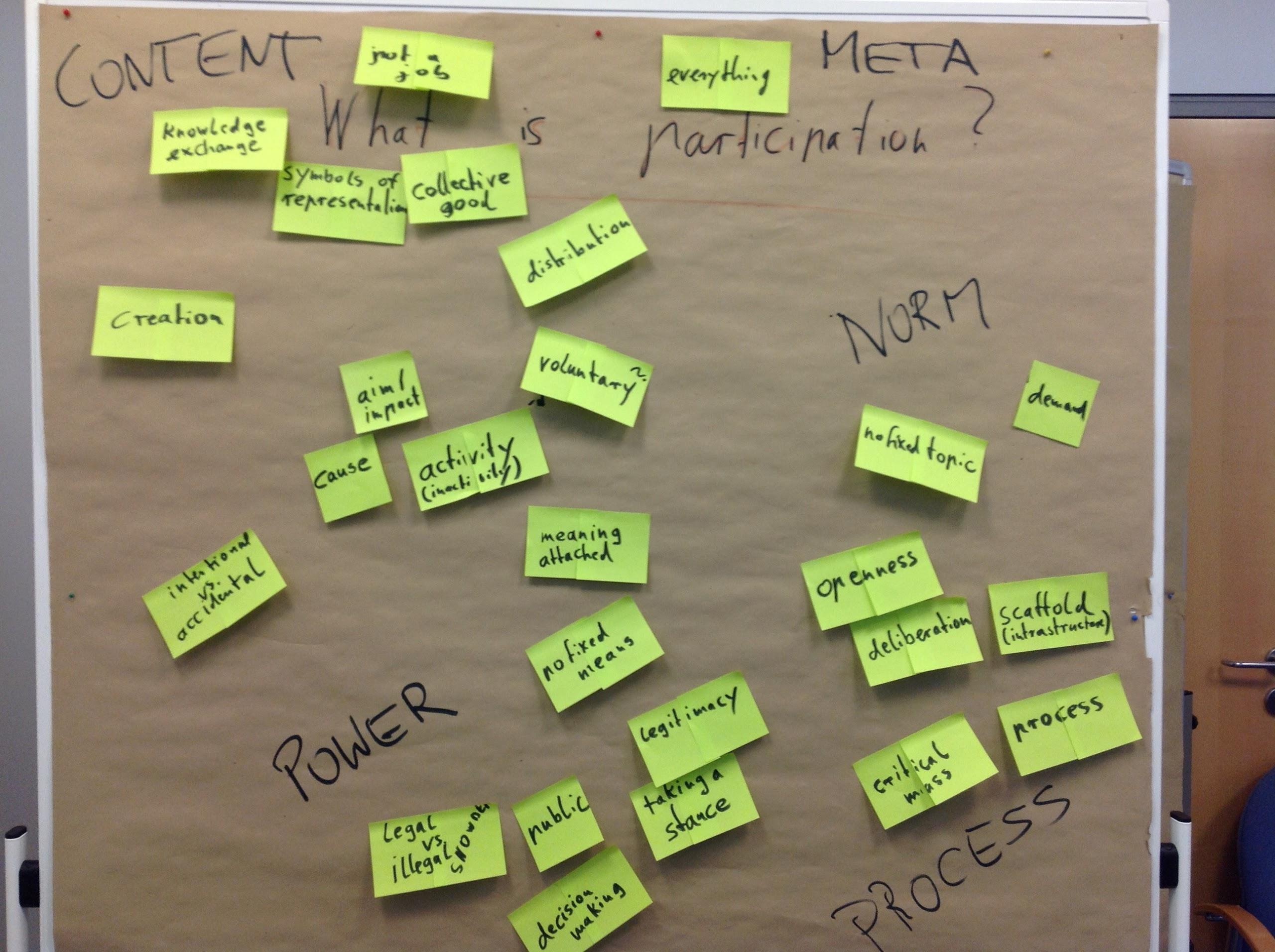 II. What should effective participation be? — Process and outcome, but how are they linked?

The processes and outcomes of participation are linked to expectations and evaluations of their efficiency. Both aspects were discussed separately by workshop participants favoring one or the other. With regard to the design of the process of participation, broadly speaking, one has to perceive to be included and recognised. Together with visibility, these aspects related to the notion of the significance of individual contributions within the process, which is considered an important incentive to overcome the costs of engagement. Yet another perspective attracted greater attention. The notion of effectiveness linked to the ownership of the process helps to understand why people are likely to take part in the process even though they don’t like the expected outcome. The reason for this lies within the design of processes which are considered to be trustworthy and legitimate. The acceptance and internalisation of societal participatory norms has been acknowledged within political sociology as a predictor for the likelihood to participate. With regard to an outcome-orientation of participation, questions of goal-orientedness, of who has set that goal, and under what authority an issues has been raised. Some workshop participants stated that effective participation should also make a difference in society and that it is effective when powers are balanced. It became clear in this second part of the workshop, that what is actually taken as effective or successful participation is highly variable and relates, among other things, to the different actors involved in making participation function, be they citizens, stakeholders, or facilitators. Still, the question of the links between the design of a process and the outcome of participation seems to be an open question for research.

III. How can participation be made effective? — Frames of reference of effectiveness

Once the aims of effective participation are clearly formulated, the question still remains what and who makes participation effective. The workshop participants agreed that this question depends on the specific case as well on the individual context, and thus is difficult to answer via fixed principles. Instead, reference frames of effectiveness exist. When the frame changes, the notion of effectiveness is also likely to change. For research it is then useful to step back from single observable phenomena and define classes of cases that have something in common. A good example might be to compare what is considered effective online participation within the political context and within the corporate realm. Furthermore, Wikipedia often holds as a successful example of participation concerning its process and outcome. What has been recognised as key point, and also within the discussion, is that many people’s different motivations and intentions are facilitated by a dynamic and flexible regulatory structure and ordering system, which are able to negotiate and balance conflicting goals and interests. The discussion among workshop participants furthermore revolved around additional conditions, resulting in a list of measures that go into crafting the processes and settings in order to make participation effective, such as access, defining objectives, providing a shared base of knowledge, incentivisation, leadership, (new) forms of hierarchies, and the authority to enforce decisions. 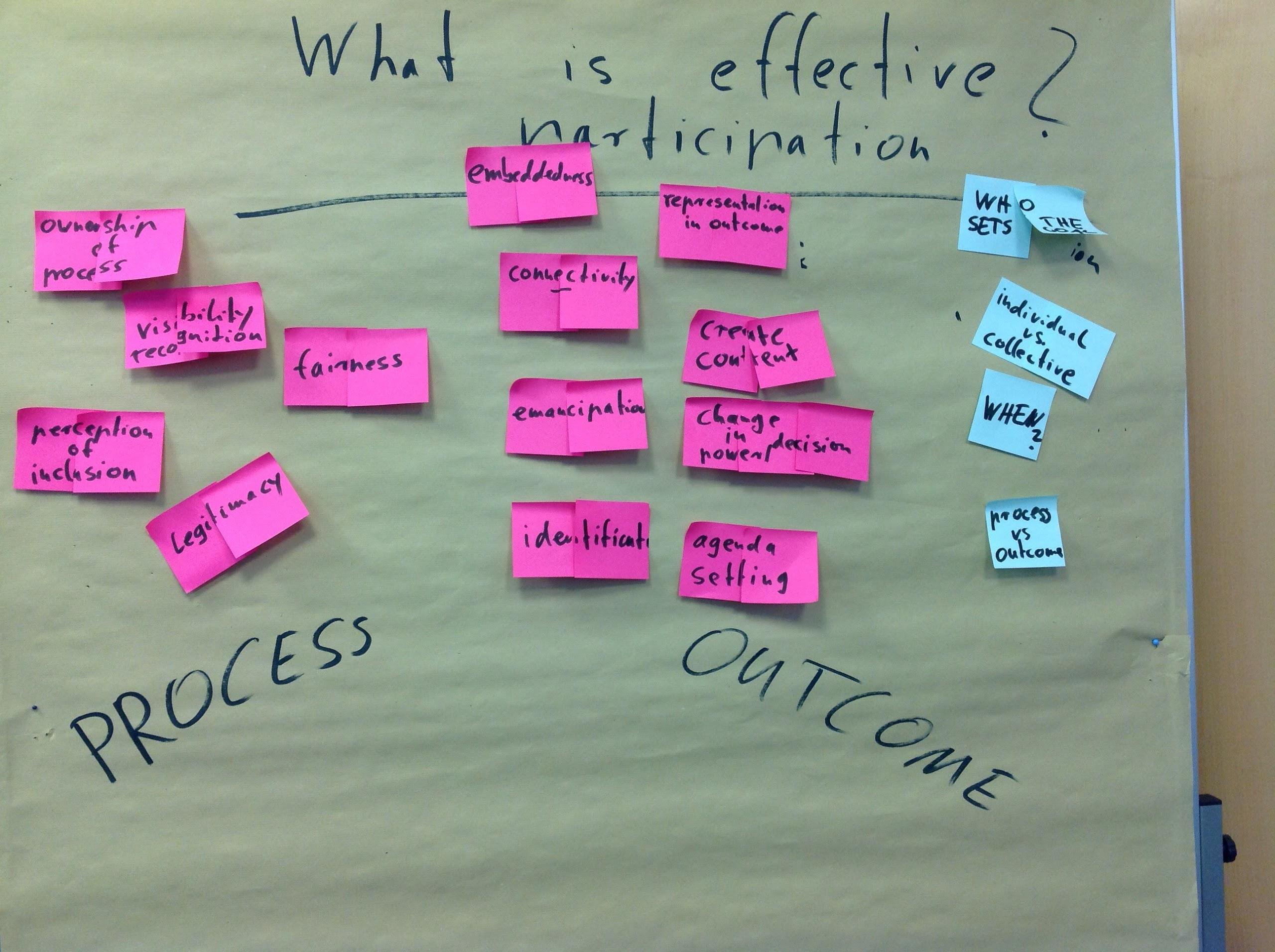 So, was it effective for you?

On the one hand, there are plenty of academic, professional and lay opinions and concepts about participation and how it works out effectively. On the other, participation processes of any kind involve different agents with different agendas. The top-down perspective on participation – which indicates the more goal-oriented debate and also is often preferring a quantified output – has not disappeared, even though the bottom-up perspective which is centered on the process and where the outcome might remain unclear has gained much greater attention in the light of online participatory activities.

Given this situation, the workshop first of all made a timely and important effort to collect and connect such varying perspectives and positions. As the event itself was a participatory activity too, the organizers finally asks those who contributed whether they felt that participation in the workshop was effective and what strategies could inform future attempts to participate effectively. Thus, what are the ideas coming to your mind when thinking about effective participation?