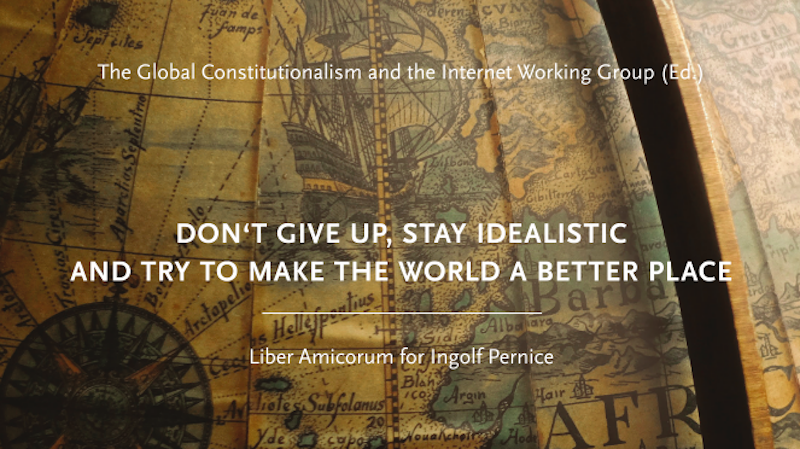 This liber amicorum is dedicated to Ingolf Pernice, one of the founding directors of the Alexander von Humboldt Institute for Internet and Society (HIIG) in Berlin, Germany. The HIIG wasn’t Ingolf’s only – or even his most important – waypoint in his career inside and outside academia, but maybe a comparatively challenging one and hopefully one of the most insightful. This waypoint was challenging because Ingolf stepped out of his academic comfort zone in more than one way. He stepped out of the sphere of legal scholarship at a renowned law faculty of a long-established university, the Humboldt-Universität zu Berlin, into an interdisciplinary brawl in an emerging academic field – internet research. He joined an academic institution that rather resembled a startup, a wholly different way of interacting, collaborating and innovating than within the halls of the academic ivory tower. However, he rose to the challenge formidably. Ingolf was integral to forming the diverse crowd of people with their different disciplinary backgrounds and academic histories into the institute that we know today. And this waypoint was insightful, because Ingolf never stopped questioning conventional assumptions, supposed truths and traditional solutions in his endeavour to better understand the increasing digitisation of society, from state bureaucracy to everyday life, and its implications for individuals and the society as a whole.

In this endeavour, he went beyond the constraints of existing legal thinking, he ventured into the unknown, tried to put concepts borrowed from different disciplines to use and tested them for their ability to provide new insights into the law in the digital constellation, into the future of the law beyond the nation state and into the constitutionalisation processes on the global level. Central to Ingolf’s thinking was and is always and uncompromisingly the individual and the question of how he or she can evolve from an object of social regulation into its subject. How he or she can become the sovereign of a community in a self-determined and self-responsible manner, regardless of whether this community is a state, Europe or the world. He asks how fundamental rights and freedoms can overcome their artificial limitation to nation states. How we can create a global, democratically legitimised order that puts the individual at the centre, strengthens his or her rights and freedoms, and in which decisions can only claim legitimacy if they are clearly based on the demos of individuals and their decision-making.

Consequently, the central focus of his academic work in recent years has been to establish the human being as a point of reference and as an actor in international law – as a bearer of fundamental rights, as a source of legitimacy for socially binding political decisions and as a co-decision maker. With his work, he aims to make use of positive as well as negative experiences in different forums – from local participatory budgeting to the global Internet Governance Forum – in order to strengthen the direct involvement of all stakeholders, especially citizens, in deliberation and decision-making. He has always paid particular attention to the question of how information and communication technologies can be used to strengthen the transparency of political action, accountability and participation – online and offline.

We brought together a small collection of friends, colleagues and disciples to contribute to this volume. They have worked with Ingolf, in projects under his lead or where he contributed or engaged in discussions at HIIG, or engaged with concepts that Ingolf helped shape. They were influenced by Ingolf’s work or in scientific interchange with him. Either way, the contributions in this volume show the wide variety of fields and topics where Ingolf left his mark. They also convey that they are connected beyond Ingolf as a person as they deal with how the digital society can be shaped – as a global, sustainable, democratically legitimised, rights and freedoms-protecting order.

The HIIG researches the development of the internet from a societal perspective with the aim to better understand the digitalisation of all spheres of life.

Would you like to receive the latest news on internet and social research? Subscribe to our newsletters.