Fake news, Russian bots, or hate speech: Twitter is a centerpiece of modern public communication, at times claimed to have a hand in Trump’s election victory or Brexit, and journalists and researchers follow it closely. But the question must be asked: Is Twitter worth all that attention?

Let’s get some things out of the way first: Yes, Twitter has fundamentally changed the way journalists work — they use the service to create and manage their brand, to get news, to find sources for stories; it has become an integral part of a journalist’s daily routine. Similarly, academics use Twitter to connect with colleagues, follow news, promote their work, participate in public discussion, and conduct research. But that is not where Twitter’s influence stops. Famously, the President of the United States regularly uses the platform to communicate, and the White House press office has decreed President Trump’s tweets as official word [1]. But he, of course, is not the only politician who is active on Twitter. Politicians as well as marginalized actors from all over the world use the platform. It is thus more than fair to say that Twitter is a highly important tool for political communication and it is important to keep an eye out on what is happening on the platform.

Yet, when reading media or academic articles, I can’t help but wonder if we pay too much attention to Twitter. Both in general, but more to the point, comparatively speaking. I posit that it is worth considering the extent to which the public — specifically journalists, academics but also politicians — overemphasize its influence on society. 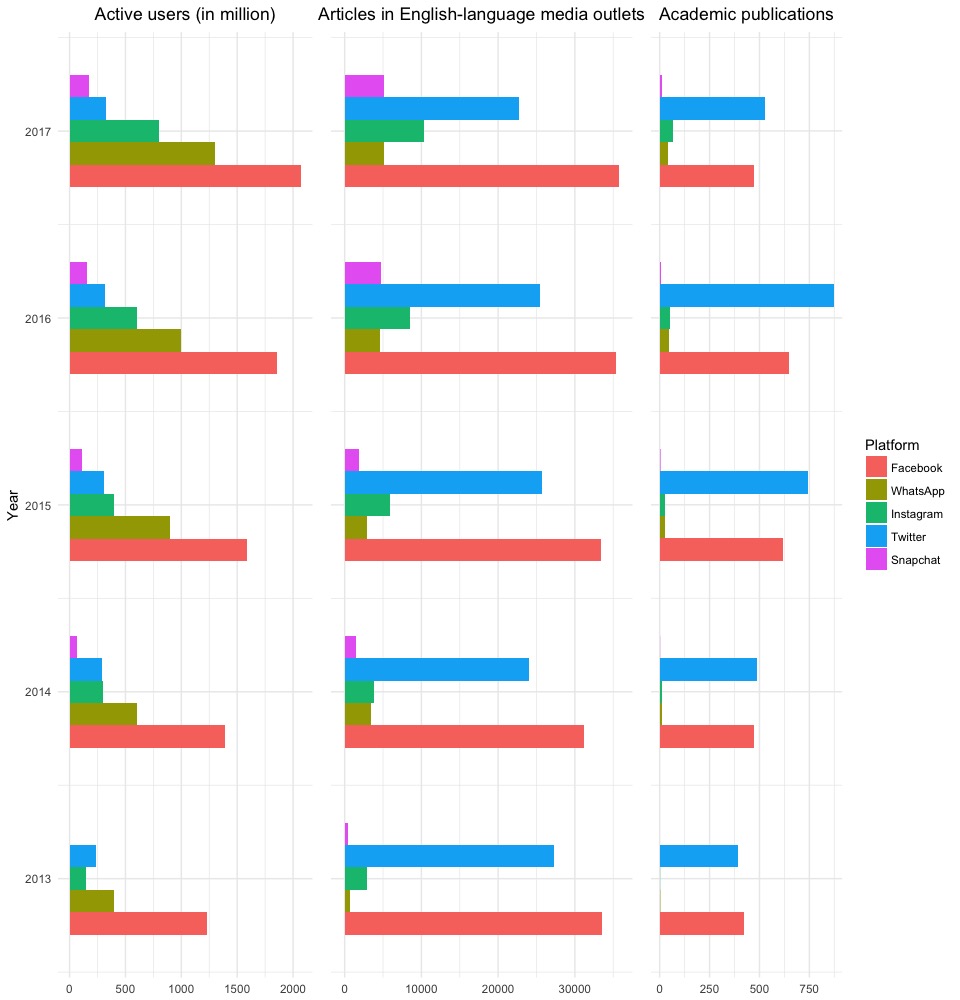 So how should we measure the influence of Twitter and other social media services? News articles and academic papers are a good and well-tested proxy to identify what journalists and scholars deem important for society and are, at times, used by politicians to start inquiries or propose regulations. I thus collected and analyzed data for news articles (using the service Factiva) and scientific papers (using the site Web of Science, a database that collects most academic publications like journal articles or books). I then compared that data with statistics on the numbers of active users on social media sites. As simple as it is: My goal was to compare the amount of attention that social media platforms receive with the number of active users they have.

The results: Twitter receives the second-largest amount of attention in the media, as measured by the number of stories mentioning Twitter in Factiva, and the most coverage in academic papers; Web of Science lists overs 3,200 publications with Twitter in their title since 2008. Yet, the microblogging platform has only roughly 330 milllion active users in 2017 (of which at least 8.5% are bots) [2]. Meanwhile, Facebook, which is the platform that gets the most media attention, has surpassed 2 billion users; platforms such as Instagram or WhatsApp have grown rapidly (with 800 million and and 1.3 billion users, respectively) and have skyrocketed past Twitter. And yet Instagram, WhatsApp, and Snapchat receive scant attention in the mass media and academia, compared with Twitter and Facebook.

Think about that for a second: WhatsApp and Instagram have been mentioned in roughly 50 academic publications each (i.e. journal articles or books with WhatsApp or Instagram in their title) in 2016, while there have been almost 900 publications on Twitter. WhatsApp, for example, has quickly become an important encrypted tool for political communication [3] and is especially relevant in the southern hemisphere. And although journalists write most frequently about Facebook, Twitter is featured far more frequently (ca. 25,000 articles) in the media than WhatsApp, Snapchat, and Instagram put together (ca. 18,000 in 2016); 330 million users compared to 2 billion.

These figures indicate that either Twitter is much more important and influential than the other platforms, or that journalists and academics overestimate the relevance of Twitter and underestimate or even overlook other platforms. I posit that it is both. Yes, Twitter is important. After all, some of the most important politicians, journalists or scholars on the planet as well as marginalized and underrepresented communities are on Twitter. The platform connects people, it gives them a voice. However, most people are not on Twitter. Twitter is by far the most public platform, but it is no agora, not the public sphere, and not representative of society.

Compare that with a recent report [4] on digital news from Oxford University that showed that more people get their news from Facebook or YouTube than Twitter, and research that suggests that Twitter can be considered an elite platform in some countries, with the most influential offline users being also the most influential on Twitter [5, 6, 7]. So why is Twitter considered so relevant? Platform bias and convenience.

I suggest that journalists or academics cover Twitter because we, our colleagues, and the people we care about are on Twitter. Twitter is thus not inherently important; it’s important because the people using it think it’s important and portray it as such. And yet Twitter users’ growth is negligible in comparison with Instagram’s or Facebook’s. And journalists, researchers and politicians (hopefully) know this.

Theoretically, at least. Which leads me to convenience: conducting research or investigating a story is hard and stressful. Prior to the advent of Twitter, finding a difficult source or collecting millions of data points could take ages; we now supposedly have a world of information and people inside of our smartphones. Twitter makes it easy to sift through a lot of tweets quickly via third-party apps and gather data thanks to its API.

Think about events this year like the attack in London’s subway, the G20 protests or the recent explosion in New York. Reactions by politicians, experts but also images and videos can either be found via Twitter’s search or are already part of a well-curated timeline. Just compare this to Facebook’s semi-closed API and the myriad of pages and groups. Whereas Twitter allows you to collect all kinds of metadata about users to then crunch the numbers, Facebook is much more closed, and thus research on the social media service is much harder and inconclusive. And let’s not even talk about Instagram or WhatsApp, where big data research is almost not possible, although the services are widely used for political communication and manipulation [8]; both privately [9] and in groups [10].

So let me ask you this: Do readers really need the next story on bots on Twitter or research article about how a specific hashtag spread? Are fake news or bots on Twitter, for example, even as important as we academics make them out to be? Journalists and researchers have a social responsibility and we should ask ourselves, if we think that our pieces are relevant because they are truly relevant, because they tell us something about our society, about the formation of public opinions, or if we think this they are relevant because we’re directly affected by it and have access to the data? We should be aware of our platform bias and that for every voice we hear on Twitter, there are several that we ignore. Maybe they are on Facebook, WhatsApp, Instagram – or not online at all.

We should be aware that some of our research has real-life consequences on the public and political debate on social media and democracy. Associated with the research and the coverage of Twitter, especially in the context of Brexit and the US election, seems to be the hypodermic needle concept: the idea that bots or fake news on Twitter had a direct impact on the decisions. This is dangerous. Not only because the concept should stay in the closet of antiquated media impact concepts, but also because this might lead to real-life political consequences. That’s not to say that we shouldn’t look at Twitter for answers but rather that we need to learn what the questions are that Twitter can help us answer, and where we’d rather look elsewhere. This sounds, admittedly, straightforward. But the data begs the question: is it?

This post was also published on Elephant in the Lab