How the GE2017 campaign is shaping up on Twitter

The 2017 General Election is now only a matter of days away, with much campaign activity taking place online, and in particular on Twitter. Here, Stefan Bauchowitz and Max Hänska crunch some numbers on the twitter activity of the main parties’ supporters, and find that Labour’s dominate the medium; that Labour engagement is more driven by Corbyn’s account than the Tories’ is May’s, and that Labour is engaging more people.

How Leave won Twitter: an analysis of 7.5m Brexit-related tweets

If we are to believe the pundits, social media has played an outsized role in recent political events, and so it is not surprising that its role in the upcoming General Election has been the subject of much attention. In particular, Labour’s poll surge has at times been attributed to its social media prowess, in spite of its comparatively diminutive war chest.

Using Twitter’s streaming API, we follow election related tweets. Combining our own search and data from Democracy Club, we follow 2119 Twitter accounts of candidates standing in the election (though only 1883 were active). We are also collecting tweets that match a set of election related keywords (e.g. GE2017, votelabour, and others). So far, we have collected around 1.7m tweets involving candidates and a further 8m tweets matching our keywords. Though we are continuing to collect data, it seemed timely to set out some of the clearest trends in advance of the vote.

By volume of tweets, Labour’s presence is far greater than that of other parties (Figure 1). On aggregate, Labour’s network out-tweets that of the Tories by a factor of 3, though the activities are somewhat more level if only the tweets created by prospective parliamentary candidates or their staff are taken into account – Labour candidates tweet 1.8 times as often as Conservatives.

Tracking candidates, including retweets of and interactions with their tweets, it is clear that overall there are more Labour supporting users, and that Labour supporting users tend to tweet more frequently. Figure 2 plots numbers of users (Y-axis) against the number of tweets per account (on the X-axis). Labour’s dominance on Twitter derives from its wider network of users who mostly retweet (and sometimes quote or reply) Labour candidates. Their retweets drive up the volume of Labour tweets. Some of those high-frequency accounts are bots such as @tory_zone or @labour_zone that automatically retweet party-related tweets. Even though we have not yet made an effort to identify other bots, a noteworthy share of activity appears to be automated.

The election campaign to date has focused heavily on the personality of the party leaders. The Conservative campaign casts Corbyn as unfit to serve as PM, while placing May front-and-centre of its own pitch of ‘strong and stable’ leadership. On Twitter party networks are highly centralised around the leader. Thirty-seven per cent of interactions with Labour refer to Corbyn, while 24% of those interacting with the Conservatives retweet, quote or reply to May. While Corbyn’s role in the network has been relatively stable (Figure 3.1), the abandonment of a highly personalised campaign by the Conservatives is reflected in the relative importance of Theresa May’s account. In particular, Boris Johnson’s centrality rose sharply after May 26, possibly because polls appeared to tighten and Corbyn was rated more favourably by some polls than May. (Figure 3.2).

The preceding analysis focuses on the networks around candidates and how their messages are referred to by others. Looking beyond the national networks and to the candidates’ activities themselves, there is some indication that Twitter as an election tool appears to be used for local campaigning. Though far from being an exact science, we identified users’ locations by feeding user-provided location data into Google’s geocoding API and translated the resulting coordinates into constituencies. About 20% of candidates’ interactions are with users hailing from their respective constituencies. Even though the national networks are centralised, individual Twitter activity of candidates does not appear to be coordinated. Looking at the constituency level, Figure 4 shows what the electoral map would look like if we used local Twitter activity to determine the outcome, thought Candidates’ or constituents’ activity on Twitter are obviously not good predictors of electoral outcomes. For the majority of candidates, the level of activity on Twitter would seem to bear little or no relation to their prospects of winning or whether their seat is marginal. 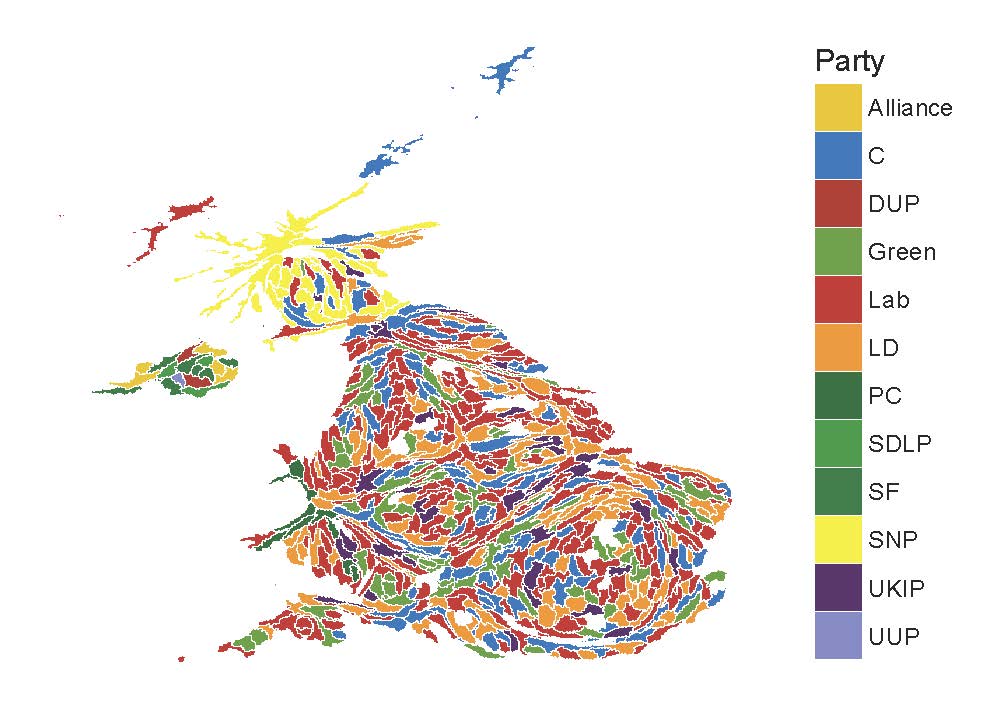 Figure 4: Most active at constituency level

Looking at frequently used, policy relevant hashtags from our keyword-based sample, #foxhunting, #brexit, and #dementiatax stands out as the most prominent, though #brexit is the most stable in its use over time (Figure 5.1). For illustrative purposes we include a word cloud of frequently used hashtags in Conservative, Labour, Liberal Democrat and over-all election related tweets (Figures 5.2-5.5)

Lastly we mined the URLs shared in our election data. Overall, the most shared URL links to the voter registration site. Given the overall dominance of labour, links to labour supporting information outweighed other links. A Buzzfeed analysis of conservative Facebook sites notes the dominance of links to negative stories attacking Corbyn, and the notable absence of links to positive stories about May. To some extent this is mirrored on Twitter. Amongst the 30 most frequently shared URLs by Conservative supporters 13 linked to attacks on Corbyn and Labour (also see here and here) and only 2 pointed to stories about conservative policy. Amongst the 30 most shared URLs by Labour supporters, 14 attacked conservatives, and 7 focused on Labour’s policy (for example see here and here.

Overall, Twitter is dominated by Labour supporters, and Labour supporting engagement is driven by Corbyn’s account more than Conservative engagement is driven by May’s account, confirming the anecdotal impression that Labour is engaging more people on social media. Based on a preliminary analysis of the content shared, Labour’s messaging also appears to be slightly more positive and policy focused. 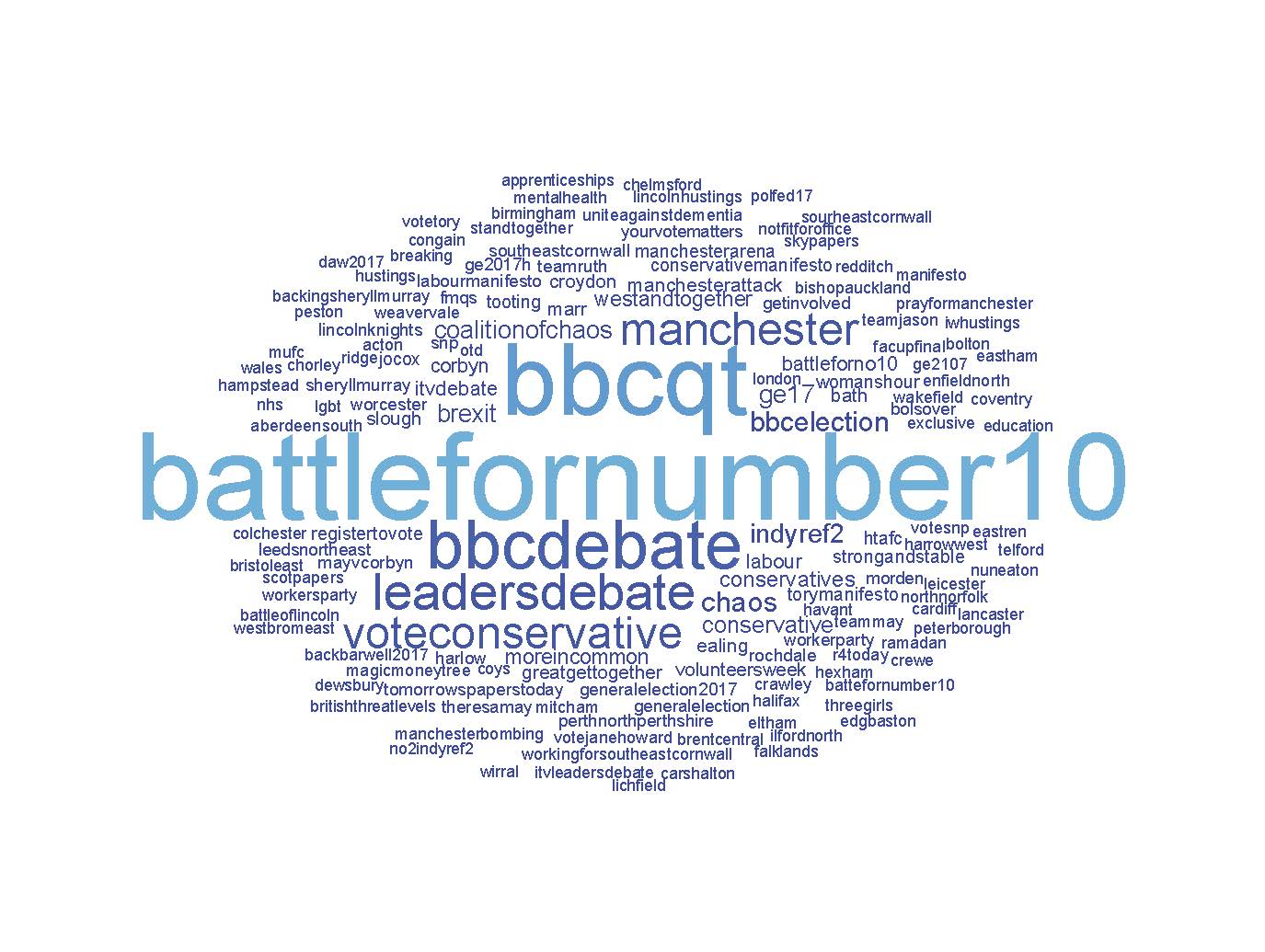 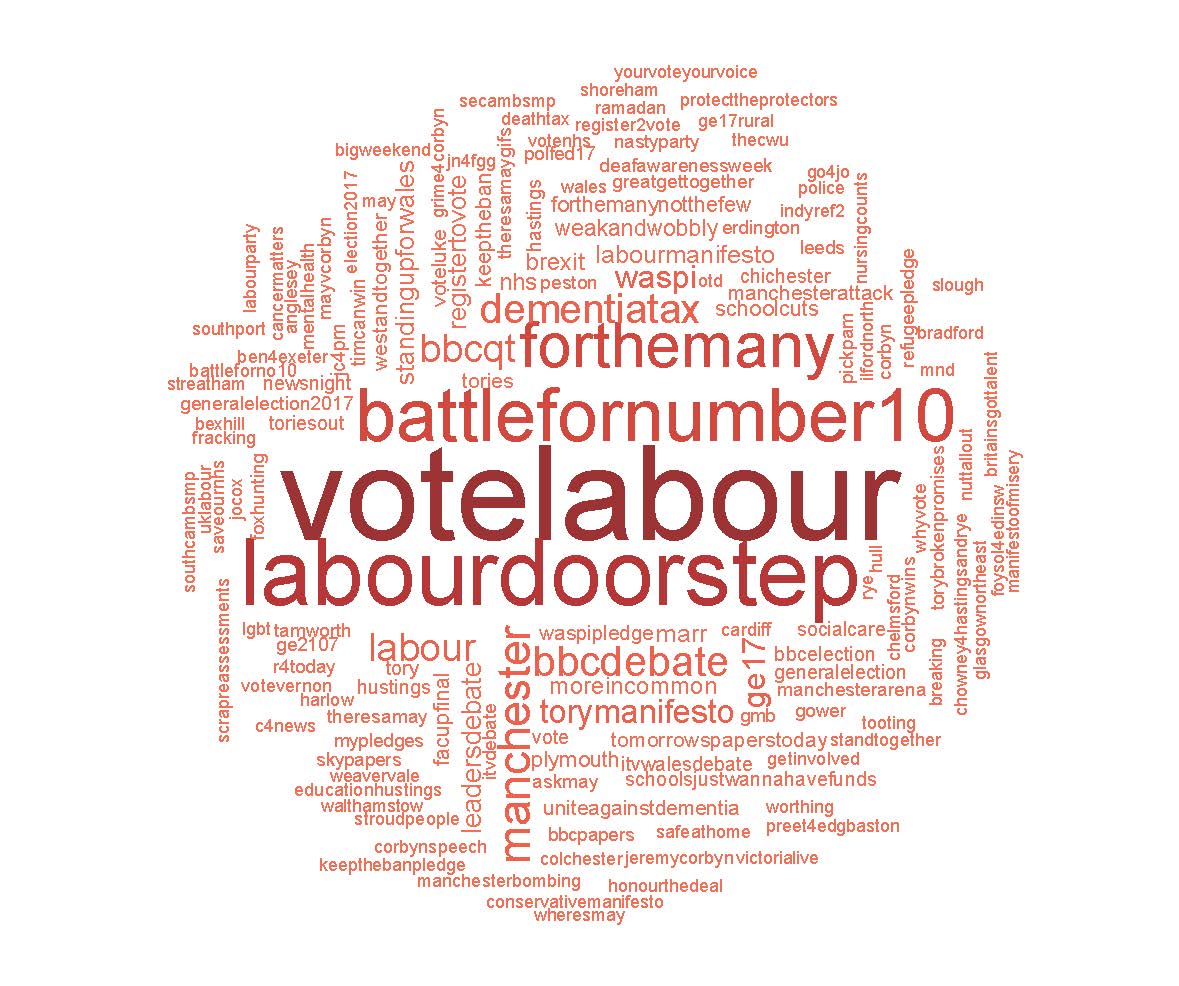 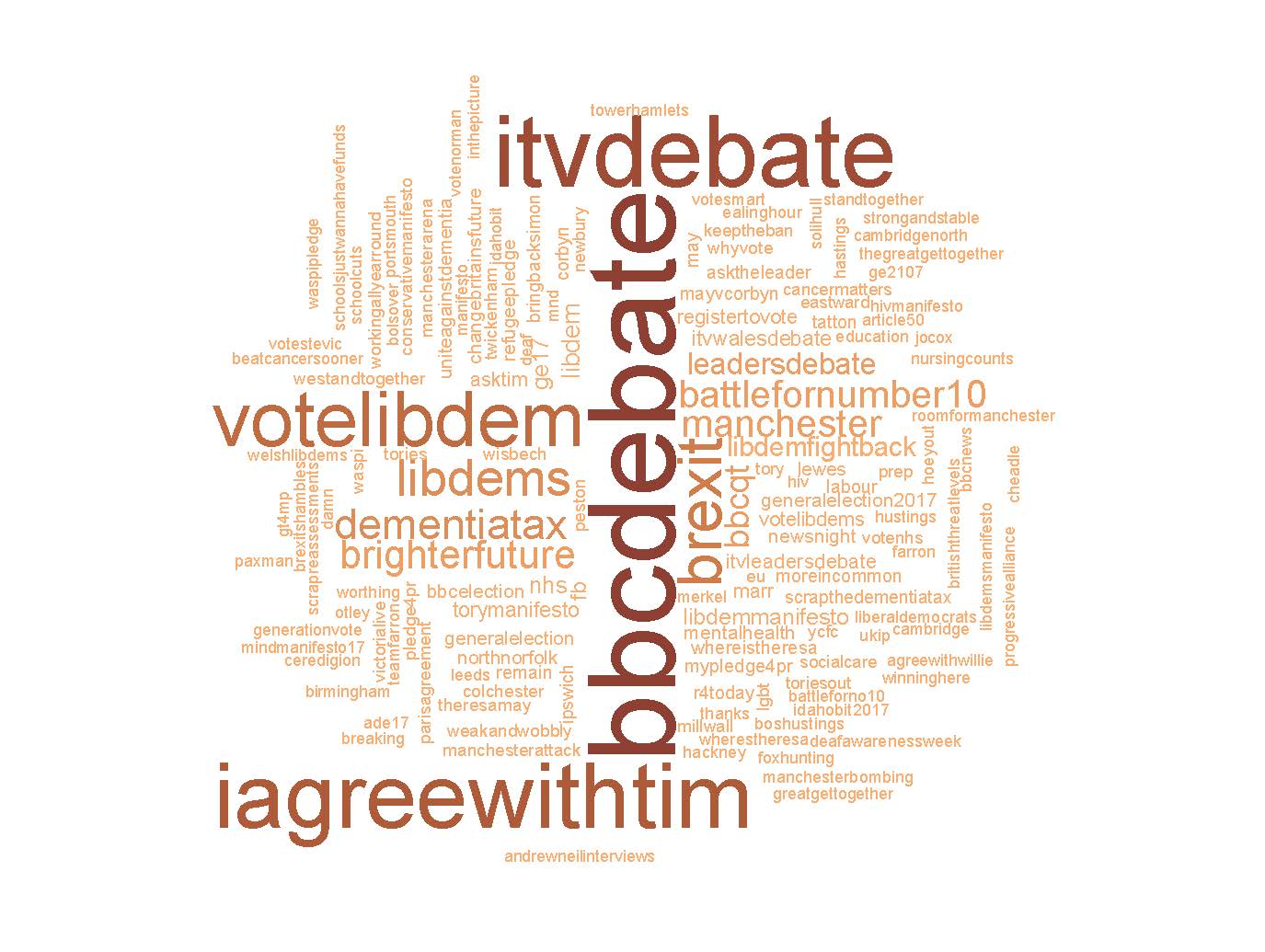 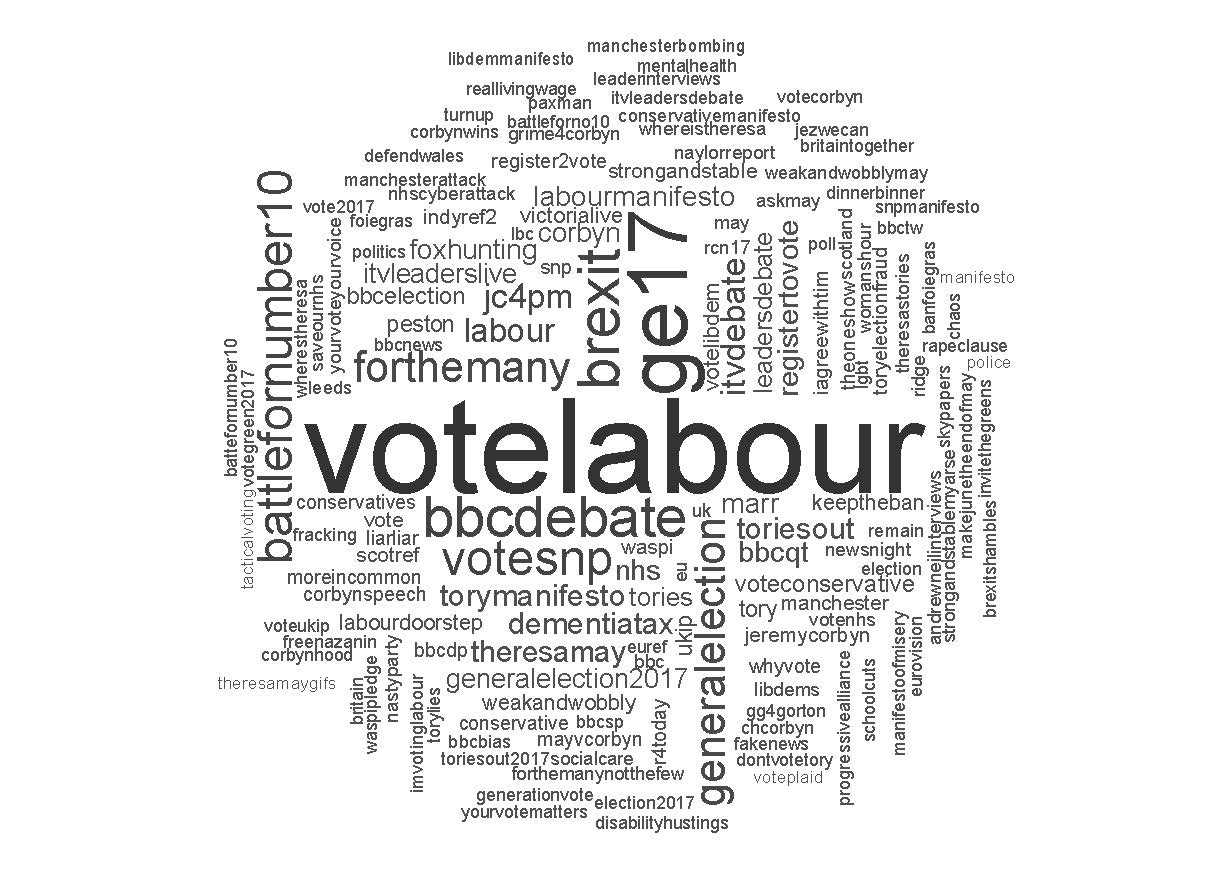 Figure 5.5: Most prominent hashtags in our overall election related tweets

This blogpost was first published on the British Politics and Policy Blog by London School of Economics. Stefan Bauchowitz holds a PhD from the London School of Economics. Max Hänska is a lecturer (Assistant Prof.) at De Montfort University (UK) where his research interests center on social media, political communication and collective decision-making. During the summer he was a visiting researcher at HIIG.