How much difference can technology make for societal participation?

Whereas the morning sessions of the meeting on Chances and Risks of Social Participation sought to further and facilitate the ongoing academic discussions about participation in economic, political or civil society settings across various disciplines, the concluding session aimed at stepping back a bit from the science-focused discourses by looking at the actual realization of technology-enabled participation. Carlos Affonso Pereira de Souza, Director of the Rio de Janeiro Institute for Technology and Society and Mayte Peters, Chair of the Board Publixphere e.V., both with a background in research and academia, provided their insights on two actual applications and practices of societal participation.

The ambiguous role of technology for participation

The introduction to the Concluding Session titled with the question of “How much difference can technology make?” was given by Wolfgang Schulz, Research Director of the Alexander von Humboldt Institute. He pointed towards the ambiguous role internet-based platforms and digital tools may have in participatory activities. While participation online and offline is not an issue caused by technology, technical means shape the rules of communication and rules of participation in public communication. This, as he mentioned, is being illustrated for example by so called social reporting and community tools provided to users for exercising particular control over their own content but also over the content of others in online social networks; a topic which has recently been analysed by Chris Peterson, Researcher at the Massachusetts Institute of Technology.

Then it was first Carlos Affonso Pereira de Souza from Brazil who gave a talk on the “Marco Civil da Internet” — a civil rights framework for the Internet in Brazil, which is an example of the use of technology to improve public participation in the creation of laws.

The law development process of the Marco Civil, which Carlos Affonso also thinks of as a Bill of rights for Brazilian Internet, has undergone two rounds of open discussions and consultations and almost received 2000 contributions from citizens via an online platform. Whereas the first round intended to generate general ideas and principles, the second consultation sought to discuss the actual wording of the law. It marked the first time people have their hand in writing “a law” for the Internet. In 2011 the final draft was issued to the Brazilian parliament. 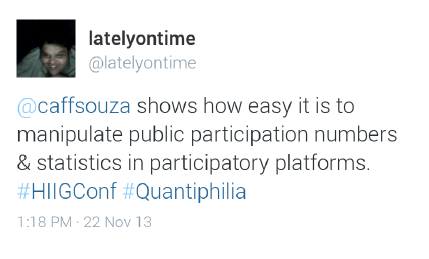 Carlos Affonso also gave an update on what happened afterwards. The wording of the law was slightly changed also including contributions made via Twitter and other communication channels, however, every change was recorded and made available online. The demand for transparency has been and will further be an important topic in such open participatory processes, Carlos pointed out. However, challenging questions remain, such as of how to deal best with a situation when wordings and arguments have changed in a transparent way. After several sessions in parliamentary discussion the draft is still pending waiting for a vote.
Nevertheless, in the aftermath, online consultations for other internet-related policy issues have taken place concerning a copyright law reform and the age rating-system for games. 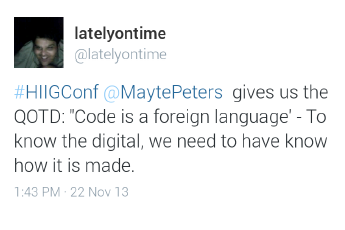 Then it was Mayte Peters who started her presentation from the observation that established forms of political participatory systems are being somewhat disconnected from ways in particular younger people are going in order to participate. She made a good point saying that adolescents are already involved and engaged in political discussion but not in the traditional way via elected representatives for instance. It’s the aim of a project she initiated, which is called Publixphere, to close the gaps between established and new forms of participation as well as offline and online participatory activities. In this way the project Publixhere is meant to be more than just an online discussion platform. However, whereas on the one hand communication and exchange under participants is facilitated through the online environment, Mayte on the other hand indicated that limitations lie within the technology itself. Translating and implementing principles of effective citizen participation into the design of a technical platform and code is a challenging endeavour which not at least needs the knowledge of experts. 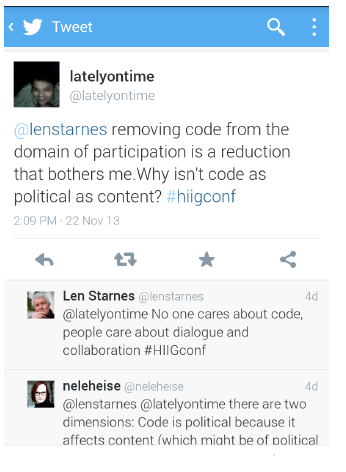 Do Internet-based platforms empower? The answer to this question, which opened the discussion with the audience, depends on the case and context. The public discourse on SOPA, PIPA, and ACTA for example significantly diffused via various online platforms. In Brazil however, having access to the internet is still a basic prerequisite for taking part in such online activities. As Carlos Affonso further added, even if people are using the internet they may be empowered in some or the other way; but the more fundamental issue is that they have to understand why using it is important. Related to this the Marco Civil community has left traces which gives Carlos an optimistic evaluation about the Marco Civil as a integration of the debate of Internet freedom in society. Legacy of that discussion has put Brazil in a different stage on Internet Governance, despite the fact that a voting in parliament is quite unlikely, as Carlos put it. 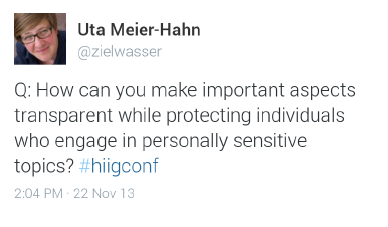 The discussion also set up a relation between anonymity and transparency in participatory processes. To what extent it is necessary to identify the single person participating in a larger issue and where to limit transparency is not easy to measure. Where to draw the line is an ongoing question not only for researchers but also in governments. Another interesting question came up in the discussion. While we have already realised that technical means change the process of participation, we have not yet gained a deeper understanding of how it changes the notion of participation itself. 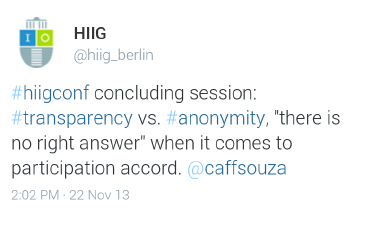 The concluding session showed the linkages between the actual and everyday realization of participation through technical means in practice and how research can contribute to better understand arising questions. Thereby, it became clear that circumstances, contexts and contents of participation are specific and as such have to be analysed or even evaluated by taking these specifics into account. A very lively discussion and audience engagement pointed to the yet more than before crucial questions of anonymity in participatory activities and transparency of the process. Besides, it’s the overarching questions whether technological means, digital platforms or in general the technological environment do not only change participatory processes but also what we regard as participation and the notion of participation in society at large.