Harmful online speech and the role of collective identities

Harmful speech or hate speech is a tragic part of online communication. By examining the how users talk to each other about climate change in online comment sections of German websites, I highlight the importance and limits of collective identities when thinking about harmful speech.

Imagine this: you’ve just responded to a Facebook post about climate change. You only wanted to highlight that the threat of global warming is real and that something should be done about it, but a few moments later you find yourself in a heated online discussion with a climate skeptic. Neither they nor you are very patient with one another; ad hominems are exchanged, the other one’s intelligence is questioned, and, eventually, the page’s owner deletes your posts. Although the topic can be replaced, these often very colorful clashes, these acts of incivility, happen online all the time. In response, scholars approach online harmful speech from a variety of perspectives, ranging from law (e.g. Banks, 2010), to psychology (Cowan & Hodge, 1996), to informational sciences (e.g. Burnap & Williams, 2014), to societal ones (Papacharissi, 2004). Indeed, looking at online harmful speech through the lens of public sphere theory and thus as a result of clashing factions may help us understand some unexplored aspects of online harmful speech, since one important factor that constitutes a public is collective identity. Based on the example of climate skepticism, I want to highlight the relevance of collective identity for harmful speech, i.e. that we can look at harmful speech online between users from the mainstream who believe that manmade climate change exists and the climate skeptic faction based on their core beliefs and not necessarily due to their individual arguments.

Recent work on climate change skepticism in German online comment sections (Kaiser 2017a, 2017b) could help test this hypothesis. After analyzing over 10,000 online comments written in ten comment sections of four news sites and six climate blogs, it appears that climate skeptics are highly active online and use comment sections as a means to carry their message to the mainstream (Kaiser, 2017b). This clear online rift between the collective identities of mainstream and skeptics, then, might naturally lead to harmful speech from members of the mainstream who read these comments and who may feel provoked by the climate skeptics’ questioning of climate change. But can we see this clash of identities in the data?

To test this idea, I analyzed 1,382 online comments which were written as a response to climate skeptics. The results show that this is not the case (see Fig. 1). Abusive comments in general are rare in this dataset. Although users from the mainstream were slightly more abusive to skeptics, it is interesting to note that skeptics themselves were also abusive to each other (~8 percent to 6 percent) — at first sight, at least. A closer look reveals that although roughly 2 percent of the abusive and 7 percent of the upset comments written by skeptics were written while agreeing with fellow skeptics, the latter group did not react to the skeptics’ abusive or upset comments negatively, suggesting that skeptics were in this case not necessarily abusive of other skeptics but rather of others – most likely the mainstream. In contrast, 7 percent of the abusive and 13 percent of the upset comments written by mainstream users were written while being critical of skeptics. This is only the case for 4 and 8 percent of the comments written by skeptics. This, then shows that although the numbers seem similar at first (see Fig. 1) they differ with regard to how they have to be read and understood. 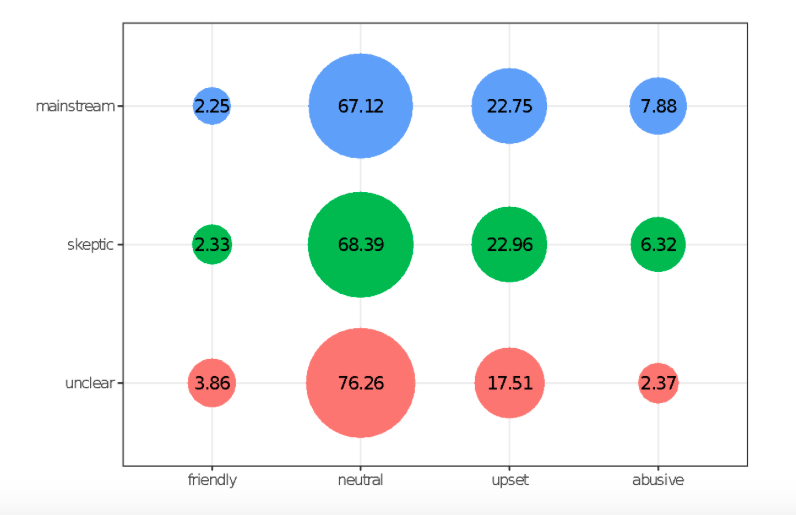 Online harmful speech is a serious societal issue that needs to be fought as well as understood. Demonstrating that it can be a product of an underlying clash of opposing publics highlights two important aspects for consideration: 1) harmful speech cannot only have an incredibly damaging effect on an individual level but also may lead to the fragmentation of the public sphere, as harmful speech will likely contribute to a widening of the gap between publics by alienating the ‘other’ side, harshly emphasizing the differences between collective identities and thus enforcing an ingroup-outgroup thinking. 2) Researchers that study online harmful speech should thus also take the context in which harmful speech is spoken into account (e.g. who it is directed at, how the tone differs from the message, etc.) to understand the societal impact of harmful speech. This is especially the case when using computational methods: although the methods often allow us to identify harmful speech, they do not necessarily show us the context.