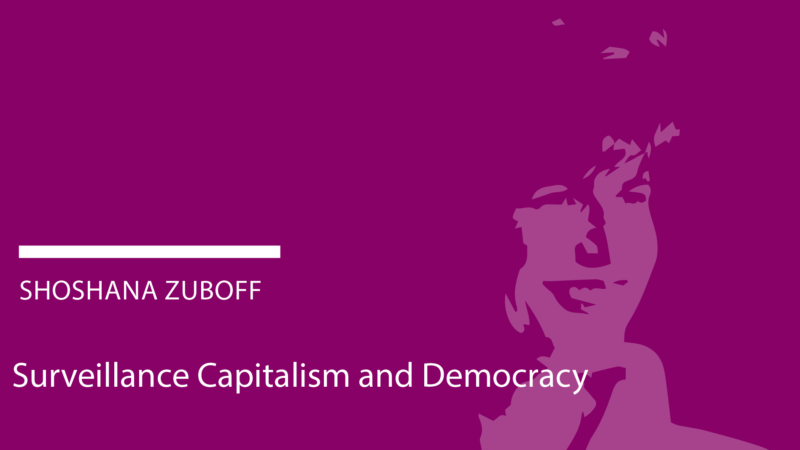 The collection and analysis of data is changing the way economies operate. Are these changes so fundamental that they can be said to have led to the emergence of a new form of capitalism – surveillance capitalism? If people’s behaviour is made increasingly transparent, do we become a society in which trust is no longer necessary? Are individuals a mere appendage to the digital machine, objects of new mechanisms which reward and punish according to the determinations of private capital? How is social cohesion affected when people become dispensable as a labour force, while their data continues to provide function as a source of value in lucrative new markets that trade in predictions of human behaviour? How should we understand the new quality of power that arises from these unprecedented conditions? What kind of society does it aim to create? And what ramifications will these developments have for the principles of liberal democracy? Will privacy law and anti-trust law be enough? How can we tame what we do not yet understand?

Shoshana Zuboff is a social scientist and author of three books, each of which has been recognised as the definitive signal of a new epoch in technological society. Her latest book, The Age of Surveillance Capitalism reveals a world in which technology users are no longer customers but the raw material for an entirely new economic system. Zuboff is the Charles Edward Wilson Professor Emerita at Harvard Business School and was a Faculty Associate at the Berkman Klein Center for Internet and Society at Harvard Law School from 2014 until 2016.

Learn more about the Humboldt Institute

The current rapid pace of technological change creates enormous uncertainties – and thus the need for explanations that help us better understand our situation and shape the future. The Alexander von Humboldt Institute for Internet and Society (HIIG) and the Federal Agency for Civic Education (bpb) are therefore continuing the Lecture Series Making Sense of the Digital Society that was launched in 2017. The aim of the format is to develop a European perspective on the current processes of transformation and its societal impact. The first speaker of this year’s series was sociologist Eva Illouz, followed by Dirk Baecker, José van Dijck and Louise Amoore. The event with Shoshana Zuboff on 6 November is part of the Berlin Science Week 2019 and the keynote of the DigiKomm conference 2019.

Registration for the event with Shoshana Zuboff

The event with Shoshana Zuboff is fully booked. Unfortunately we cannot accept any further registrations. Do you want to be the first to learn about upcoming events?