The Alexander von Humboldt Institute for Internet and Society is proud to be screening the documentary Remix, Remake, Rip-Off: About Copy Culture and Turkish Pop Cinema and hosting a Q&A with the director Cem Kaya after the screening. 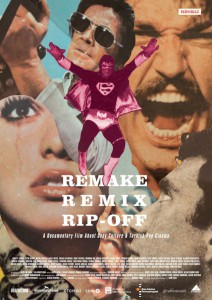 In an age of intellectual property rights and billion-dollar studio budgets, only somewhere copyright couldn’t reach could create such a cinematic mash-up…

Turkey in the 1960s and ’70s was such a place. Here, filmmakers working with tight budgets and even tighter deadlines found creative ways to build one of the biggest film industries in the world. In order to keep up with the demand, they copied scripts, remixed and recut Hollywood productions and mixed original and locally produced footage into new films.

These movies were shown in Turkey and beyond, and Turkish communities in Germany were able to rent videos of their favourite Fantastic Turkish films. But with the arrival of satellite services, which allowed people to access Turkish television, many video stores closed down and most of the films were destroyed.

Director Cem Kaya grew up with these films, and has spent 12 years researching and interviewing people involved in the Turkish Fantastic Cinema industry. He will be joining us for a screening and a Q&A discussion, so join us for an evening of pop cinema, popcorn, and remix magic.

With thanks to Cem Kaya, and Drop Out Cinema eG