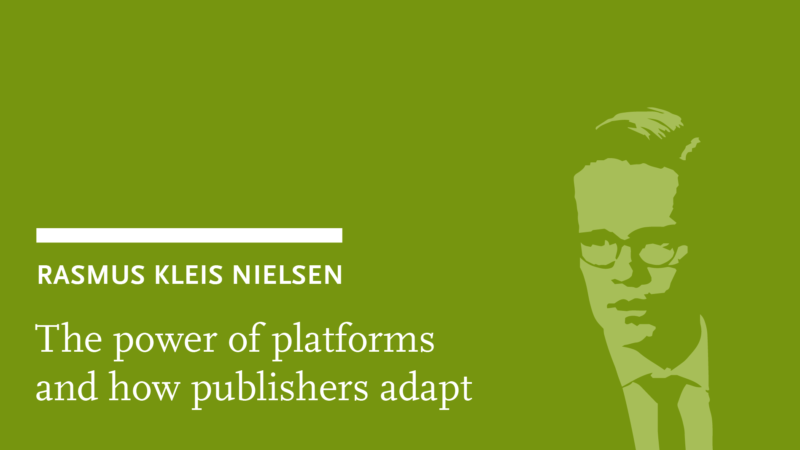 Rasmus Kleis Nielsen: The power of platforms and how publishers adapt

Today, more people follow the news via platform companies like Facebook and Google than via any news organisation in human history, and smaller platforms like Twitter serve news to more people than all but the biggest publishers. Most news content is still produced by professional journalists. But the way in which we discover it and the distribution of the content is changing rapidly. But who decides what is going to be displayed and what not? And who profits from our behaviour? All this goes along with the increasing use of search engines, social media, and the like for news.

In this lecture, Rasmus Kleis Nielsen will revisit the history of the first twenty years of relations between platforms and news publishers to identify the underlying dynamics that have shaped the development of our digital society, and will shape it for years to come. He argues that publishers have – sometimes reluctantly, but often actively – fueled the rise of platform companies by embracing the very real opportunities they provide. This is the case even though they also challenge publishers’ historically dominant position by competing for attention and advertising and by controlling key parts of the infrastructure of free expression. In the process publishers, like the rest of us, become increasingly empowered by and dependent upon a small number of centrally placed and powerful platforms.

Rasmus Kleis Nielsen is Director at the Reuters Institute for the Study of Journalism and Professor of Political Communication at the University of Oxford and Editor-in-Chief of the International Journal of Press/Politics. Most of his research deals with news media organisations and their ongoing transformations, changing forms of digital media use in political and news-related contexts, political communication and campaign practices. He is involved in a wide range of different comparative research projects around the future of news, the changing business of journalism and the rise of digital media.

There will be no admission after the start of the Event.

The current rapid pace of technological change creates enormous uncertainties – and thus the need for explanations that help us better understand our situation and shape the future. The Alexander von Humboldt Institute for Internet and Society (HIIG) and the Federal Agency for Civic Education (bpb) are therefore continuing the Lecture Series Making Sense of the Digital Society that was launched in 2017. The aim of the format is to develop a European perspective on the current processes of transformation and its societal impact. The first speaker of this year’s series was sociologist Eva Illouz, followed by Dirk Baecker and José van Dijck.