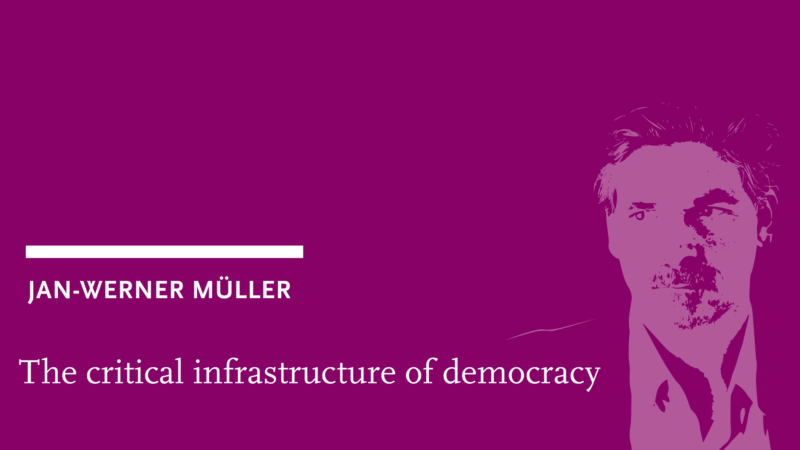 Ever since the nineteenth century, political parties and professional media were widely deemed indispensable for the proper functioning of representative democracy. They constituted what one might call the critical infrastructure of democracy, an infrastructure which enabled citizens to use their basic rights effectively and also to reach each other (and be reached). Both intermediary institutions are undergoing major structural transformations today. It has proven difficult to judge these changes, partly because we lack a proper account of the distinctive roles of intermediary institutions beyond standard claims of “connecting citizens to the political system”. The lecture will offer such an account and also suggest normative criteria for judging how well intermediary powers are working.

Jan-Werner Müller is Professor for Political Theory at Princeton University. He is co-founder of the European College of Liberal Arts (ECLA; today: Bard College Berlin). In addition to numerous published articles in the international press, Müller is the author of various monographs such as “Contesting Democracy: Political Ideas in Twentieth-Century Europe” (2013), “Was ist Populism? Ein Essay” (2016), or “Furcht und Freiheit. Für einen anderen Liberalismus” (2019). His essay “Was ist Populismus?” has been translated into numerous languages and is considered a central work for understanding contemporary political developments. Currently, Müller is developing a reassessment of intermediary institutions in democracy, which he will examine in the lecture.

The event will be held in English. Jan-Werner Müllers lecture will be broadcasted live from 7 pm – if the livestream is not being displayed here, please reload this page. The recorded video will be uploaded to this website a few days after the event.


Making Sense of the Digital Society

The current rapid pace of technological change creates enormous uncertainties – and thus the need for explanations that help us better understand our situation and shape the future. The Alexander von Humboldt Institute for Internet and Society (HIIG) and the Federal Agency for Civic Education (bpb) are therefore continuing the Lecture Series Making Sense of the Digital Society that was launched in 2017. The aim of the format is to develop a European perspective on the current processes of transformation and its societal impact.