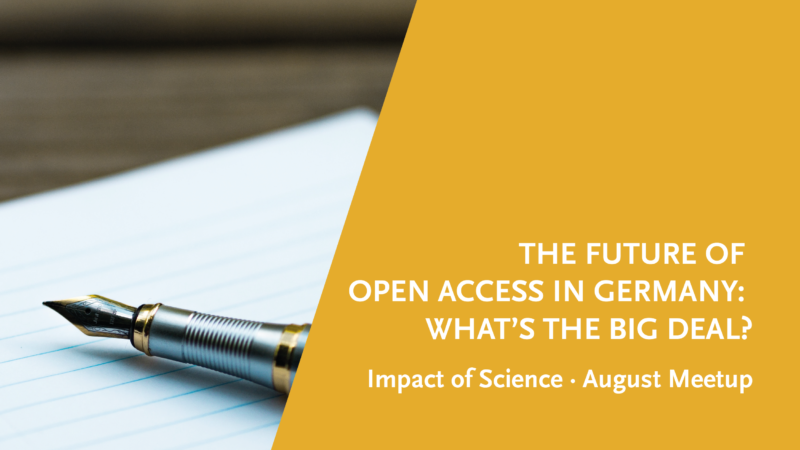 Over the past two years, more than 150 German research institutions have formed a coalition to encourage scientific publishers to conclude new licensing agreements for Open Access scientific content. The negotiations of the DEAL consortia are the most comprehensive Open Access action to date in Germany and possibly worldwide. In July it was announced that the negotiations between DEAL and Elsevier, the largest scientific publisher, were suspended for the second time.

Although Open Access seems to be gaining speed, it is still unclear what the future will look like. At this meeting we will discuss the DEAL negotiations and the future of Open Access in Germany with Dr. Nick Fowler (Chief Academic Officer of Elsevier) and Gerard Meijer (member of the Wissenschaftsrat – scientific council).

The event will be held in English and will start at 7 pm. Please register through our Meetup page.

Disclaimer: By signing up you consent to be photographed during the event and to the use of the content in connection with the promotion and public relations of the event.

7.00 pm: Welcome note from Elephant in the lab (Christian Kobsda, Elephant in the Lab) and Introduction (Benedikt Fecher, Alexander von Humboldt Institute for Internet and Society)
7.15 pm: Statement from Nick Fowler (Chief Academic Officer and Managing Director Research Networks at Elsevier)
7.30 pm: Statement from Gerard Meijer (Director and Scientific Member at the Fritz Haber Institute of the Max Planck Society and a member of the science council (Wissenschaftsrat))
7.45 pm: Discussion + Q&As (Moderation by Benedikt Fecher)
8.15 pm: Reception with beer and pizza at the HIIG patio

Dr. Nick Fowler is Chief Academic Officer and Managing Director Research Networks at Elsevier. He leads Elsevier’s Research Marketing group, which is responsible for defining and communicating how Elsevier delivers value to the world of research, i.e. researchers, librarians, research leaders, funders and governments. Nick Fowler also leads the Global Strategic Networks team, which collaborates with senior leaders from the world’s leading universities and research policy-makers globally. Nick joined Elsevier in 2003 and was Director of Strategy from 2005-2012.

Prof. Dr. Gerard Meijer is Director and Scientific Member at the Fritz Haber Institute of the Max Planck Society (Berlin) and a member of the science council (Wissenschaftsrat). As the president of the Executive Board of Radboud University Nijmegen, Gerard Meijer was part of the Dutch negotiation commission that has been in talks with eight major publishers, which together account for 70 to 80 percent of the turnover of all Dutch scientific publications.