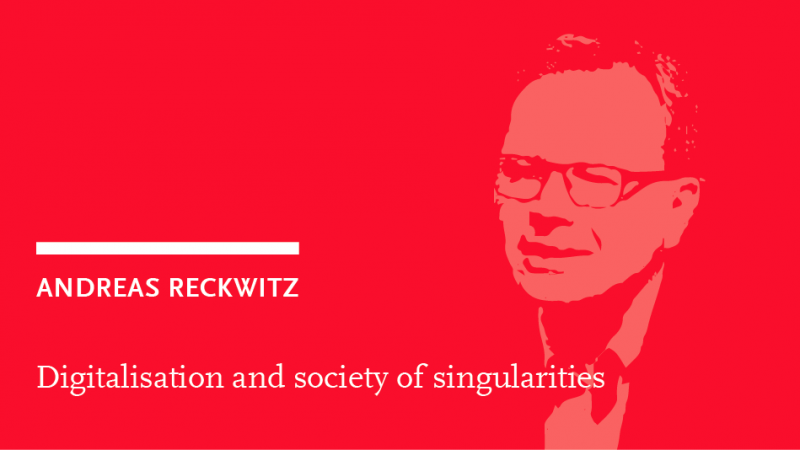 The late-modern society produces singularities. It does no longer aim at the general, standardized and average solely, but promotes and expects uniqueness. Things, individuals, events, places and communities – everything wants to be special… The result is a competition of attention and evaluation for the status of this uniqueness, the so-called singularity. The result: the are losers and winners. Digital technologies, such as social media platforms and smartphones, are a necessary condition of the process. Andreas Reckwitz asks in his lecture on the society of singularities: To what extent can digitalisation be interpreted as a mechanism of social singularisation and what are the consequences?

Reflecting on this year’s lecture series, Jeanette Hofmann, Director of the Alexander von Humboldt Institute for Internet and Society, Thomas Krüger, President of the bpb, and Andreas Reckwitz discuss in which digital society we want to live: What action potential remains in the digital world in times of increasing monopolization and data collection? How can we as a society bring about change and where do we need new political impulses? In short: How can we shape the transformation?

Andreas Reckwitz is Professor of Comparative Cultural Sociology at the European University Viadrina. His works are large-scale sociological studies on social tendencies such as subjectivation, aestheticization or singularization. Most recently published books are The Invention of Creativity (Polity Press 2017) and Ästhetik und Gesellschaft (Suhrkamp 2015), while at the end of 2017 the book Die Gesellschaft der Singularitäten (Suhrkamp) was published, which examines digitisation as a mechanism of social change. From April to July 2019 Reckwitz is Thomas Mann Fellow at the Thomas Mann House in Los Angeles.

Please register for the event using the registration form below.

The event will be held in German and simultaneously translated into English.

Alexander von Humboldt Institute for Internet and Society (HIIG) and the German Federal Agency for Civic Education/bpb are organising an academic lecture series on Making Sense of the Digital Society. The high-profile series thrives to develop a European perspective on the processes of transformation that our societies are currently undergoing. It started with an inaugural lecture by Manuel Castells about power and counter-power in the digital society in December 2017 and was continued by Christoph Neuberger, Elena Esposito, Marion Fourcade, Stephen Graham and Nick Couldry.