Tl;dr: Technology is loaded with a potential of many uses and therefore not neutral. Three research projects demonstrate how the connection between Internet architecture and values can be analyzed. All three touch on the topic of net neutrality – a term that already semantically associates technology and values.

Net neutrality: Not only a technical notion, but also a symbol

“Technology is neither good nor bad; nor is it neutral.” Kranzberg proclaimed this sentence in 1986. He thereby objected to two perceptions: that technology determines human action, but also that our action is loose from technology’s influence. This may be common sense. Depending on both context and social practice technology has a share in planned and unintended outcomes. It is loaded with a potential many uses and therefore not neutral.

Taking this into account it is notable that neutrality evolved into such an important catchword or even ideal within the discussion about the Internet, centered around the term net neutrality. The neologism connects technology and values: the infrastructure of the Internet made by man on the one hand; on the other hand the claim that citizens shall not be constrained in their communication and shall be able to gather information from freely available sources.

The term net neutrality postulates what appears to be impossible with Kranzberg in mind: that values can be translated into technology directly. Interpreting the claim this way it may be dismissed as a constuctionist’ utopia – as if technology could be fully controlled.
However net neutrality can be thought of differently: as a neologism that exposes us to a real complexity. We mean values but we have to tamper with technology. While uses may change to deliver intended as well as unintended outcomes one conclusion can be drawn: It seems to be inevitable that we keep looking over our relationship with the technical surroundings, concretize it and the behaviour it suggests.

This is exactly what three young researchers carry out with their explorations around network architecture and political communication. The presented the current state of their work at the recent Berlin Colloquium.

Lawyer Holger Greve presented the results of his doctoral reasearch on the relationship between network infrastructure and freedom of communication. He argued that the Internet should be conceived of as a network that is essential in order to actualize fundamental rights. It serves to the free development of the individual, it enables innovation as well as social participation. 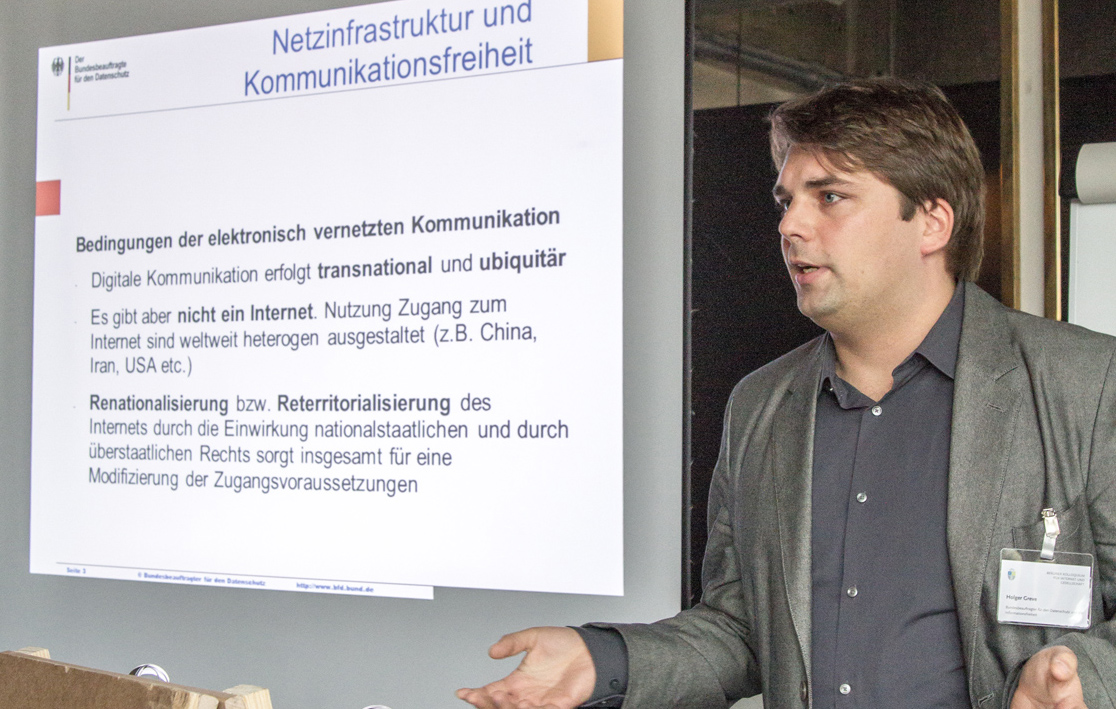 The antagonism between a transnational network and national attempts of regulation however, fosters a re-territorilization of the Internet. “It is a fallacy to think that there exists ONE Internet”, Greve said. Governments would execute diverse methods in order to limit information. These include Kill Switches, blocking and deleting content, extent ISP’s liability or abolishment of anonymity online. While these singular interventions already appear problematic, they become worse when cumulated. In Greves view a structure of strain is evolving, chilling the flow of communication considerably. Greve concludes: In German law fundamental rights are still primarily conceived of as essential defense against the state. However, with fundamental rights on the Internet there is a use of the many that constitutes a objective dimension. On this basis Greve argues that the state has to guarantee this space, that is: actively ensure the fundamental rights instead of just declaring them to be enforcable.

Does the disruption of net neutrality affect political communication? 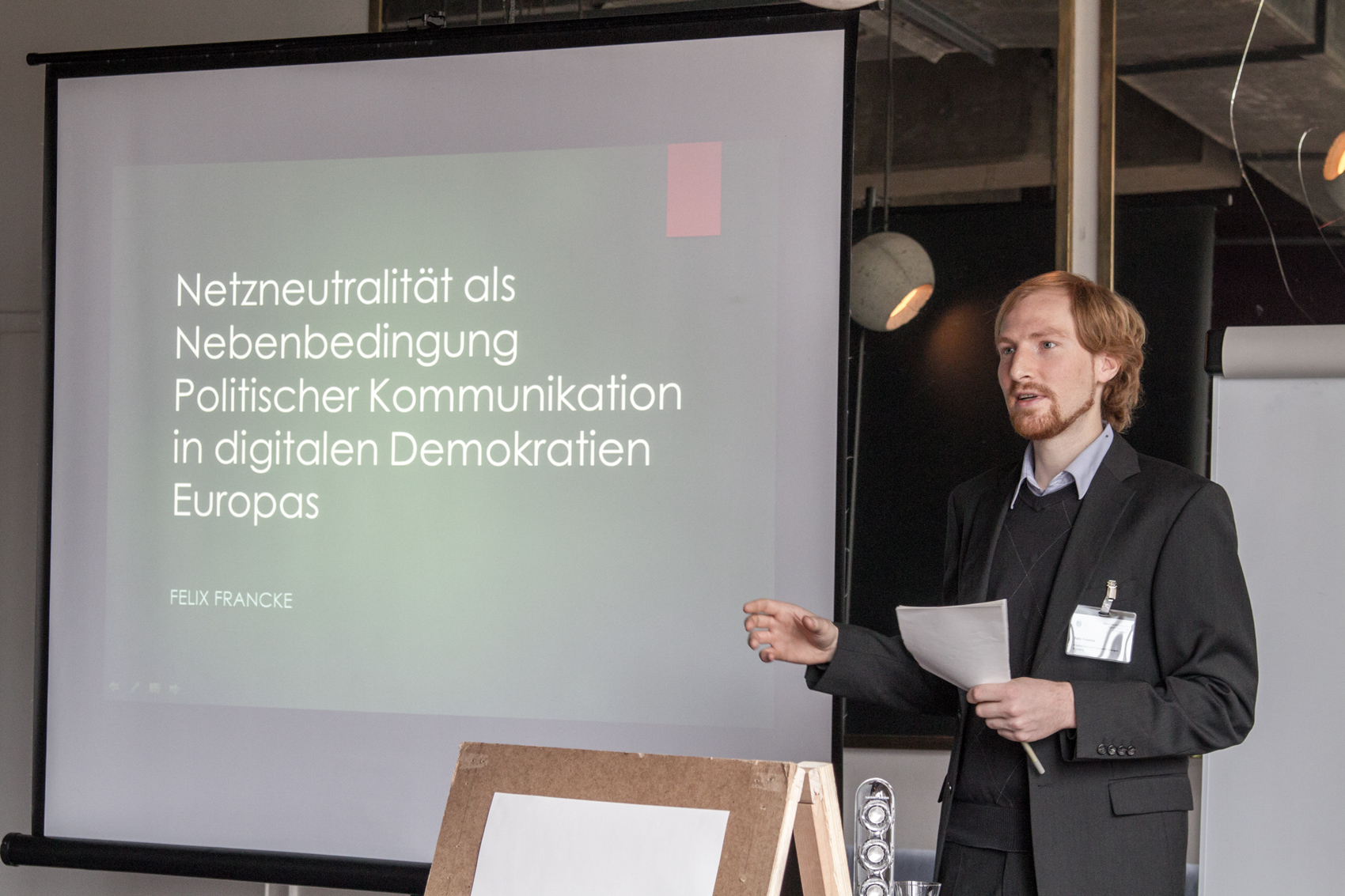 How well accepted democracies regulate information on the Internet

Communication scientist Yana Breindl elaborated on her plans to conduct comparative research about how liberal democracies use Internet blockage to regulate information. She suspects: The filtering of information may have evolved into an international norm, even in so called no-evidence countries. In order to clarify that, she will document the degree of Internet blocking in 20 of those countries in a database and analyze possible relationships between players and policiy settings in these countries. Her aim is to gain an understanding of how and upon what content the interventions happen. Getting the data for this interesting project may turn out to be difficult though, as access control sometimes happens short-termed and temporary. 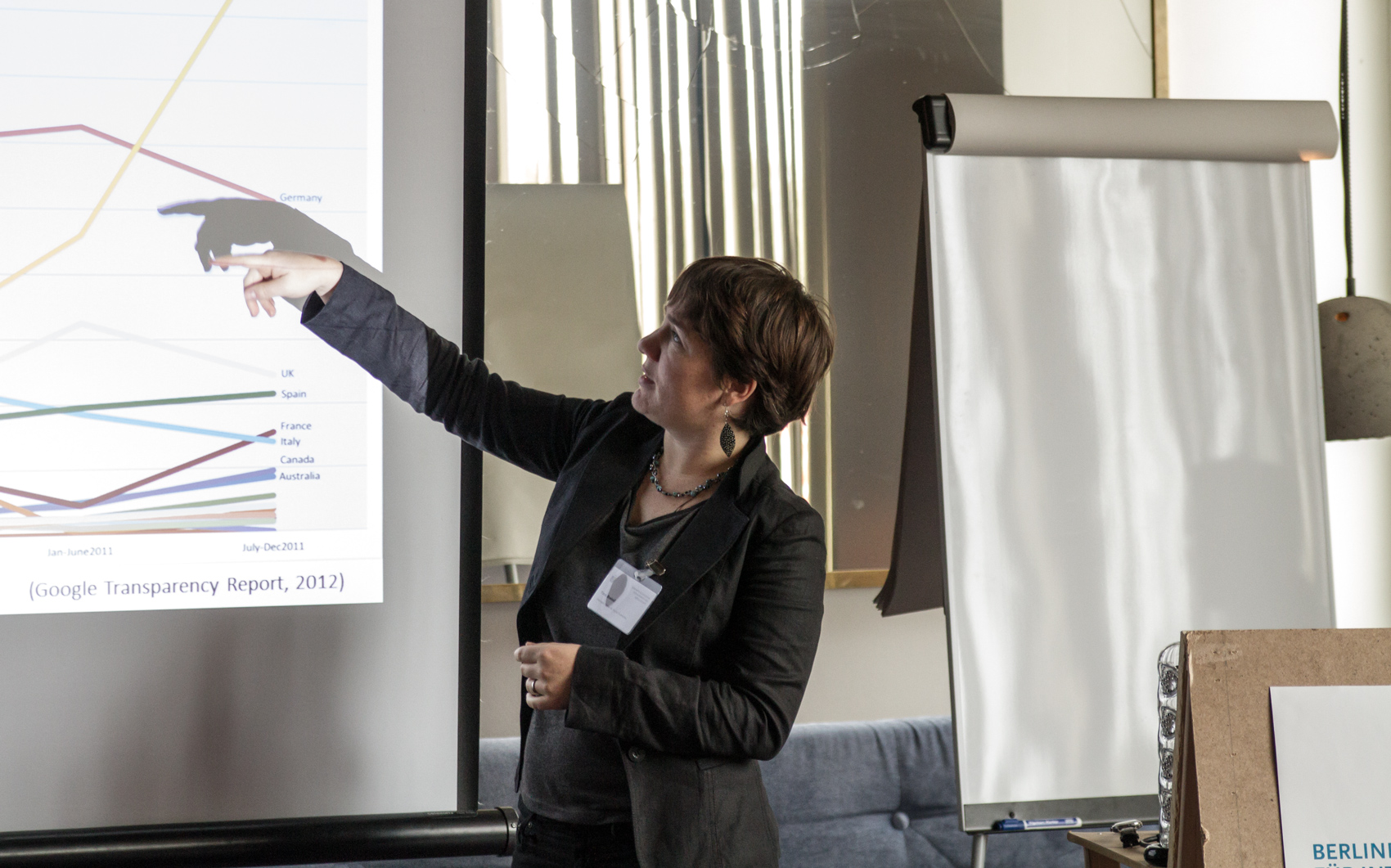