In 2012–2013 we undertook an empirical research1 with the purpose of investigating the culture and collaborative practice between companies and connected consumers in the Brazilian market. The methodological approach included:

Some remarks: (a) the market seemed to be highly sensitive to the topic of collaboration, which in some way or another was already on the agenda of companies; (b) initiatives to create collaborative platforms were disarticulated, isolated from the operation and culture, and had no clear rules (stimulus, reward, organization, functioning); and (c) the biggest challenge for companies was how to equate a collaborative culture with the competitive business environment. The market did not know how to be transparent while preserving its competitiveness. As additional restrictive factors we also identified: no flexibility in production lines for external demands; complexity of the platform management; and no legal framework to protect companies from potential risks.
The presence of companies in the digital environment was not the research object (our focus was on collaborative digital networks). However, the restricted universe of these networks led us to investigate the existing interactive platforms. Some highlights of the two most relevant platforms:

The apparent distance between the willingness shown by the executives who were at the head of these processes and the reality pointed to a structural issue, which motivated the second empirical research: the control logic that permeates the information and communication spheres of companies seems to block the evolution of (or adherence to) the network context, which splits into two main hypotheses: (a) in a society in which digital technology is widely divulged, companies are no longer players that have a linear and unidirectional dialogue with the consumer, but are part of a decentralized and complex information ecosystem with multiple players; and (b) the control logic of companies is antagonistic towards the communicative decentralization tendency of digital networks that are manifested in a more acute way in crisis situations.
Supported by a theoretical framework and the research technique “Controversy Mapping”2 the second empirical research investigated controversies generated and disseminated in digital social networks. The research object was the “AdeS” apple juice contamination (product by Unilever). Studies of controversy are intended to observe the social life in situations where an agreement has not been reached. Controversies begin when things and ideas that were taken for granted begin to be questioned and discussed (Venturini, 2009). The contamination of AdeS apple juice, held in March 2013, put into question the Unilever brand reputation, reliability in its products and the recognition of quality as one of its main attributes. The choice of this controversy resulted a set of factors such as mass consumer product; Unilever position of consumer goods product leader in the world; one of the best brand reputations; no. 1 advertiser in Brazil (marketing-oriented strategy); and the major crisis faced by Unilever in its 85 years in the Brazilian market. These characteristics, among others, allowed us universalize the experience.
The visualization technology Gephi3 brought to light the traces of controversy actors and enabled to build diagrams and cartographic maps. The research was based on (a) controversy documents and web registers; (b) qualified interviews with Unilever’s strategic executive; (c) Unilever specialized agency reports; (d) manipulation of posts published on Facebook AdeS profile defining categories according to their content; and (e) acquisition of Twitter dataset containing tweets of AdeS crisis based of search terms defined by previous content analysis of posts and tweets.
Google Trends show graphically the impact of the crisis on digital networks:

Picture 1: Increase in the web of the term “Ades”. Source: Google Trends/Brazil.

The analysis was developed in two digital social networks: Facebook and Twitter, which were the focus of Unilever’s attention. The cartographic maps (graphs) and the analysis of social networks showed that (a) on Facebook Unilever was limited to formal announcements and to invite consumers to dialogue in one-to-one interaction (call center capacity was tripled at the peak of the crisis.) and (b) hardly interacted on Twitter.
The graphs on Twitter were developed from Gnip dataSet, based on “Search Terms” previously defined. It was published about 35,000 tweets from 14 March to 1 April 2013. Although the AdeS official profile on Twitter had no visibility, the controversy became one of the “top trends” in Brazil. Were produced various maps each map devoted to a specific controversy engagement and language. Each of the maps reflects a point of view in the controversy and each network has their “spokesmen”. Alliances established in the networks.
The map 1 stands out two clusters: media network and the network mood. In the first network spokespersons are the newspapers O Estado de S. Paulo and O Globo (@Estadao and @JornalOGlobo). In the second network the spokespeople are @pecesiqueira and @dicasdora. 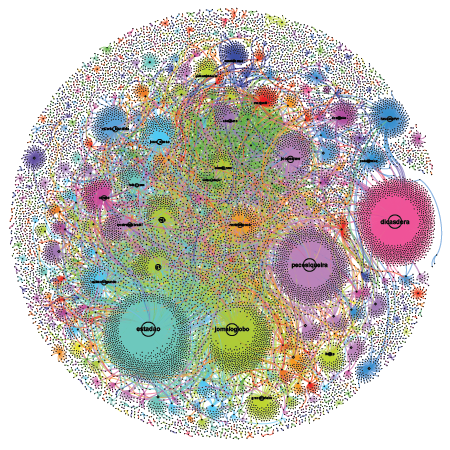 The map 2 shows the authorities pointing: (a) the non-expressiveness of @AdeS_Brasil profile and (b) the preponderance of mainstream media and mood profiles. 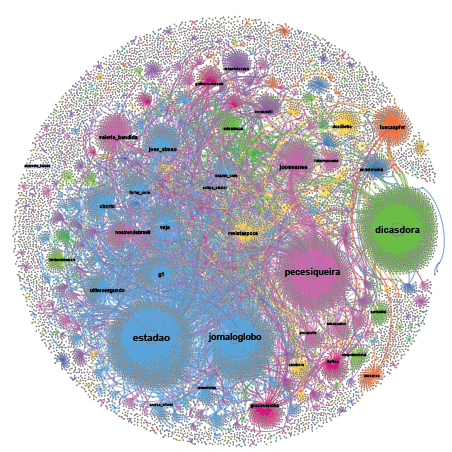 The map3 shows a single tweet posted by AdeS profile during the crisis, probably exhibit in picture 2. 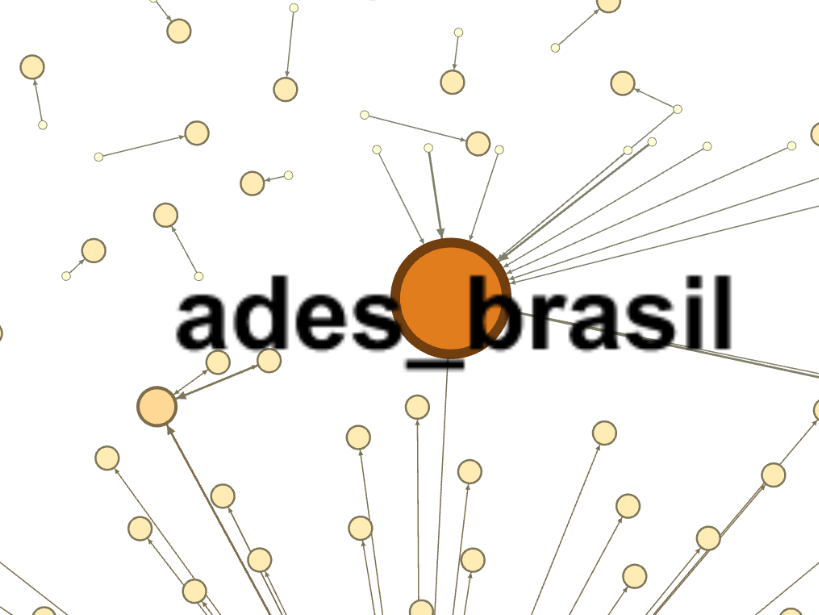 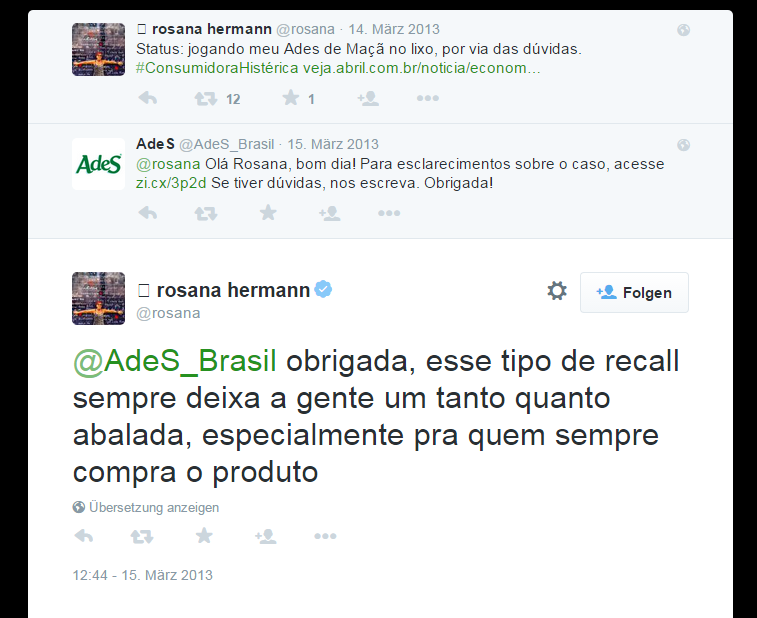 As a result of almost zero engagement of AdeS profile the maps do not reflect disputes or controversies between AdeS and consumers. The network contents of tweets are basically information even those of humor. Among the cartography evidence we observed two lines of Unilever strategy, namely: (a) appeal for a formal communication trying to meet legal requirements and not the digital social network characteristics and demands. The apparent “follow the law” strategy produced formal and bureaucratic communication pieces with low potential “viralization” and (b) “talk” to network leaders hoping they would spread their communications and messaging. Other evidences: consumers “detractors” prevailed with extremely aggressive messages against the brand; and the so-called “brand communities”, which provide a social structure for consumer-brand relationship, were not achieved.
An initial appraisal it seems to reflect the lack of familiarity with the networks. Lack of familiarity, however, is not a cause but a consequence of the antagonism between the logic of the company and the logic of digital networks, the central research assumption. The company interests in digital social networks, in general, are monitor them and track demands which may be useful in the design and management of marketing and communications strategies. An opening dialogue means a level of transparency and decentralization that the structures and control practices in companies do not allow. The first action of Unilever after contamination was convening its Crisis Committee with the intention to “control” the circumstances and to protect themselves from legal actions and actions with the potential to negatively affect your brand image.
In general terms Unilever (extended to other companies) are not prepared to face a crisis in digital social networks. It has no culture, strategy, channels, methods, procedures and tools. On the contrary, the corporate culture locks its adherence to digital networks. To build a positive relationship with the digital social networks would be essential that companies develop strategies to deal with its features: propagation power, invisibility, anonymity, transparency and dialogue in the public sphere.
The authors usually treat such antagonism as an evolutionary process; the tendency would be to overcome at some point in the future. In our view, the question is of a different nature. Control culture and practise have been inherent in companies since their origin in the first Industrial Revolution and they have survived even with all of the flexibilization of recent decades. The company as we know it is not prepared for coexistence with the dynamic of networks. There is a conflict between the company environment of rules and controls and the network environment with no rules and “without control”4.

2 Mapping of Controversies developed by Bruno Latour in the 1990s, initially as a set of techniques to investigate preferably public disputes around technoscientific issues and later evolved into a full research technique.

4 The “without-control”/“non-control” in inverted commas means the non-control by companies. 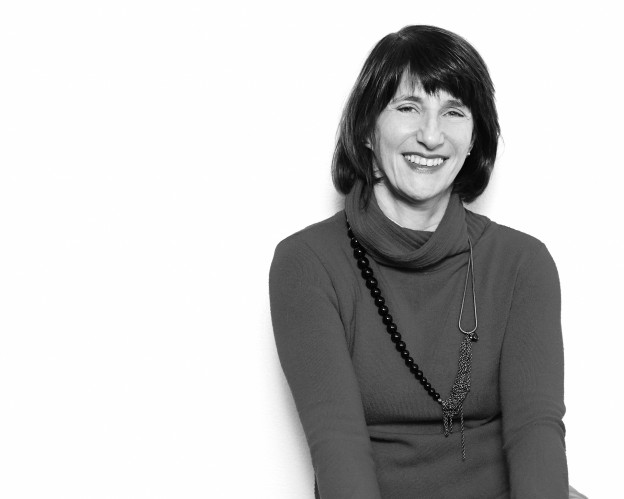